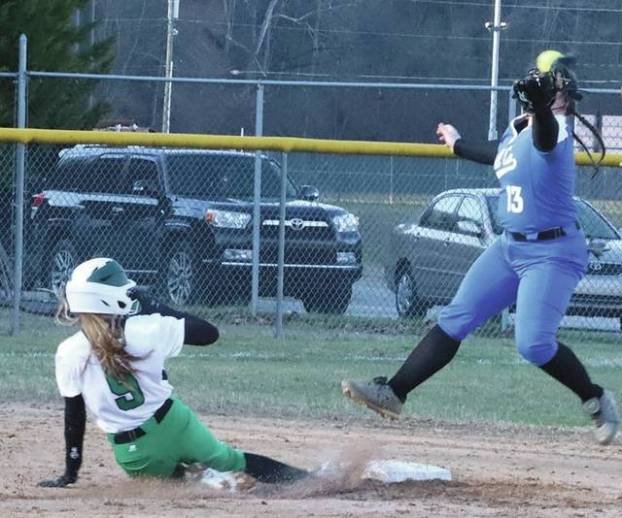 Harlan’s Angel Wynn slid safely into second base with a steal as Bell County’s Raegan Robbins went up for the throw. Bell County claimed a 12-2 victory to improve to 3-0 on the season.

A Bell County program that has spent several years at the bottom of the 52nd District is off to a much different start in 2019. The Lady Cats improved to 3-0 on the season and won their district opener with a 12-2 five-inning victory Tuesday at Harlan. The win broke a 15-game district losing streak for the Lady Cats, who had lost 33 of 34 district games since 2014.

“They came out fired up and focused. They were ready to play,” said first-year Bell County coach Alex Gambrel Barnett, a 2012 Bell graduate, the same year Bell last had a winning district record. “It seems like our girls keep getting better. I think that will continue if they continue working..”

Mackenzie Miller, a seventh-grader, was in control on the mound as she pitched a three-hitter with 11 strikeouts and five walks.

“She pitched well, and once our girls settled down a little they hit the ball,” Barnett said. “We’re still a young team and will get better.”

Payton Bennett, Kaiitlyn Cornett and Makayla Sizemore added one single each for Harlan (2-2).

The Lady Cats grabbed the lead with a five-run second inning that began with two dropped balls in the outfield. Saylor singled home one run and Brooks brought in two with a hit.

A walk and two straight errors helped Bell push its lead to 7-0. Mackenzie Griffin drove in the second run of the inning with a ground out.

Emma Jones and Haven Saylor walked in the bottom of the inning and both came home on Bennett’s single into right. Cornett singled and Reagan Jones walked to load the bases, but Miller worked out of the jam with two straight strikeouts.

Brooks, Lawson and Black had hits in the fourth inning as Bell County added five more runs with the help of three more errors. Black cleared the bases when her single was misplayed in left field.

A tall and talented eighth-grader, Brayden Blakley will likely win quite a few games the next five years for the... read more