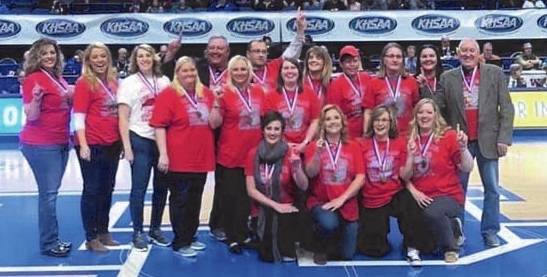 The 1994 M.C. Napier basketball team was honored recently during the state tournament to mark the 25th anniversary of its state championship. The team included Cheryl Elkins Caldwell (first row, second from right), a speech pathologist at Cawood Elementary School.

Cheryl Elkins Caldwell, a speech pathologist at Cawood Elementary School, marked a 25-year anniversary with her former M.C. Napier teammates recently at Rupp Arena as the 1994 Lady Navajos were honored during the state tournament.

The championship was the first and last for the M.C Napier as the school consolidated with Dilce Combs into Perry Central two years later. The 1994 M.C. Napier team was recognized for its accomplishment and team members and coaches were presented with medals.

“It was a great honor to be recognized 25 years later at the girls state championship. Many lasting memories were made as we went through the entire season (29-2) and ended as No. 1 in the state at Western Kentucky University,” Caldwell said. “Being a part of this team was a memorable accomplishment for me and one of my most proudest moments.”