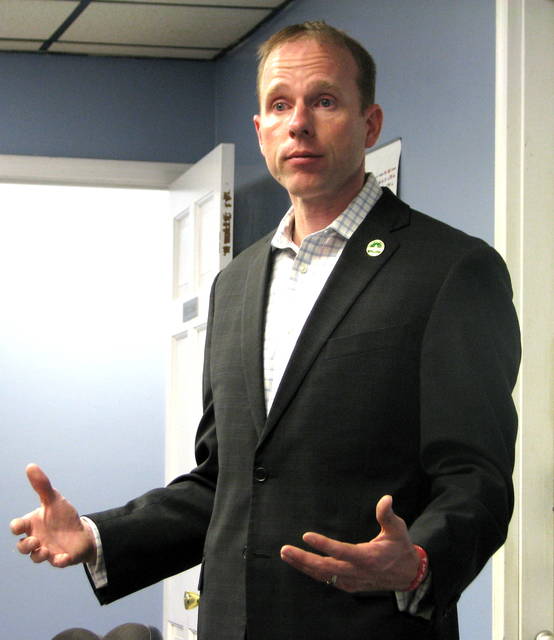 Dr. Robert Goforth, a Republican running candidate for Kentucky governor, spoke to a few community members during his Wednesday visit to Evarts. Goforth visited with community members at Evarts City Hall on Wednesday evening to introduce himself and answer questions the people had for him.

While introducing himself to the crowd, Goforth described himself as “deeply rooted in eastern Kentucky,” adding about seven generations of his family come from Laurel County and Pulaski County.

“I was raised very poor, never knowing if we’d have food. I didn’t let that define me,” Goforth said.

Goforth enlisted in the army when he turned 18 and served as a combat engineer. After returning home, Goforth attended the University of Kentucky where he graduated from pharmacy school, becoming a Doctor of Pharmacy (Pharm.D.).

As a pharmacist and business owner, Goforth described himself as hard-working, resilient and committed to a people-first agenda. Goforth added he values blue-collar workers, small business owners and seniors.

When asked to compare himself to current Kentucky Governor Matt Bevin, Goforth said “Bevin and I agree on a couple things” but then added “we also have stark differences.”

Goforth said he identifies as pro-life, and he helped pass a bill banning abortion after a fetal heartbeat is detectable. He also mentioned his view on gun laws.

“I don’t feel like you or your family should be left defenseless,” Goforth said. He specifically stated he had a part in passing a recent bill reforming concealed carry laws.

While he agrees with a few of Bevin’s views, Goforth said he has plenty of stark differences.

“If I’m elected, I will restore civility,” Goforth said as he discussed his issues with Bevin’s “bullying approach.”

“I don’t think Matt Bevin is re-electable. He’s not from here. He doesn’t understand the people’s needs here,” he added.

One of the big questions asked was Goforth’s plan for the pension system and if he thinks it can be fixed.

“I believe we can fix the pension system,” Goforth said, “in a way it’s fair and just for all Kentuckians.”

Goforth added he seeks to pass a bill to keep a defined benefit plan that will “save more than the sewer bill ever could.”

“We just have to do it the right way,” he said.

Evarts Mayor Eddie Manning described the harsh effects he has seen by losing large amounts of the monies.

Manning added that before the decrease in coal severance money, he had plenty of money to put toward different city projects for Evarts.

Goforth agreed that the region’s coal severance money needed to be brought back to the area, saying it “should’ve happened a long time ago.”

“You all have been taken advantage of so much, in my opinion. You’ve pumped the most of that money out of here,” Goforth said.

Goforth continued to address other debatable topics, such as diversifying the jobs in southeastern Kentucky, defeating the opioid epidemic, reformation of the criminal justice system, common core for school systems and legalization of marijuana.

Goforth said a lot of the regions problems come from the state government not taking the area seriously.

“If they would’ve invested in places producing coal, we could lure bigger companies in here. But they didn’t,” Goforth said. “We keep getting promises made, but boots on the ground is what I’m talking about. We have to get away from that ‘cookie-cutter’ approach.”

Goforth added the opioid epidemic could be associated with the loss of hope and poverty the people in this region experience, but says changes can be made to help that, such as bringing more jobs to the area instead of prescribing more drugs to counter it.

“Suboxone is not the right way to change that,” Goforth said. “The reason folks are addicted to these drugs is because they don’t have hope anymore.”

Goforth continued by talking about his stance on marijuana.

“I believe is has medicinal properties, but I don’t think we need pot shops to start popping up on every corner. We need to research it appropriately and protect our people,” Goforth said.

Goforth referenced a seizure medication that may contain properties of marijuana. The medication is waiting on approval from the FDA before it becomes available to the public.

Goforth hopes to make many changes for Kentucky if elected as governor with the help of the region’s people.“I humbly and respectfully ask you to vote for me,” Goforth said.

A woman is facing charges, including possession of a controlled substance, after various drugs were allegedly found by a police... read more