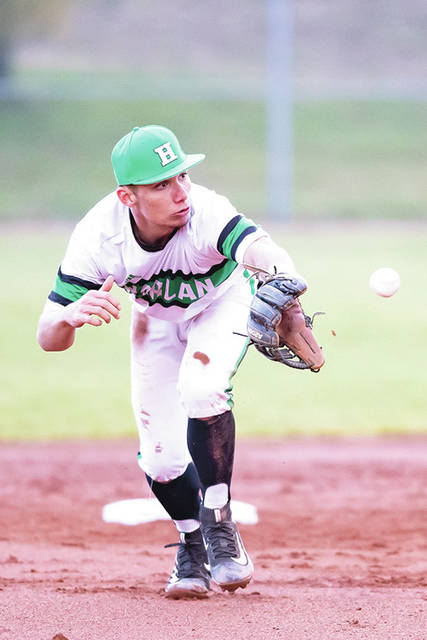 Harlan shortstop Will Varner went to his right to backhand a grounder in baseball action Thursday at South Laurel. Varner had two of the Dragons’ three hits in a loss to the Cardinals.

One day after holding Leslie County without a hit in a win over the Eagles, the Harlan Green Dragons were limited to one hit in a 4-0 loss Tuesday at Letcher Central.

Evan Browning singled for the only Harlan hit.

Will Varner pitched well in defeat, giving up four runs (three earned) on seven hits in six innings. He struck out eight and walked three.

Manny Gibson pitched four innings to earn the win for the Cougars, giving up only one hit and no walks while striking out four.

Trevor Hardin led Letcher at the plate with two singles.

A 14-run explosion in the first inning sent South Laurel to a 20-2 three-inning rout of visiting Harlan on Thursday.

Will Varner had two singles to lead the Harlan offense. Kilian Ledford added one single.

Harrison Bird pitched a complete game for the Cardinals, giving up one earned run on three hits with five strikeouts and two walks.

Harlan will return to action Friday at home against Clay County.