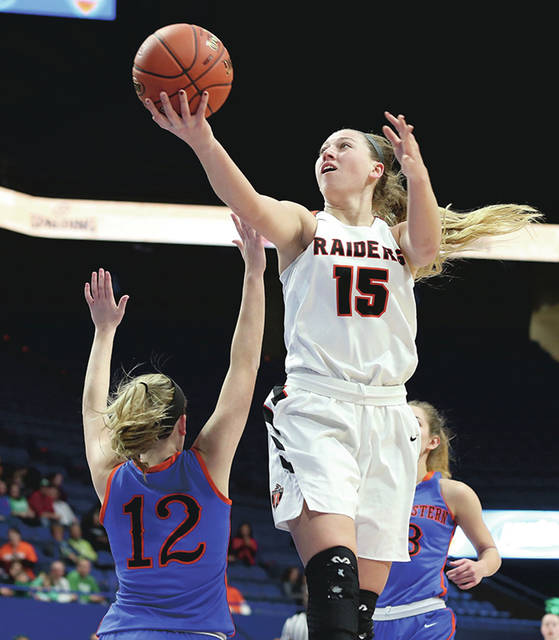 LEXINGTON — Ryle sophomore Brie Crittendon and junior Jaiden Douthit combined to score 38 points to lead the Lady Raiders to their first-ever Sweet 16 championship by defeating Southwestern, 63-48, while playing in front of 5,607 fans at Rupp Arena.

The Lady Warriors didn’t have an answer for Crittendon, who scored 21 points while Douthit added a 17-point scoring effort.

Lauren Schwartz and Maddie Scherr also scored in double figures in the win with Schwartz tossing in 14 points while Scherr, who was nursing a sore hamstring, added 13 rebounds, four assists and four steals.

Ryle (33-5) took control in the first quarter by hitting four 3-pointers en route to a 15-2 lead and never looked back.

The Lady Raiders led 33-14 at halftime and 50-36 at the end of the third quarter before seeing Southwestern put together one final rally.

Alexa Smiddy’s free throws with 2:26 remaining cut her team’s deficit to 57-48, but Ryle put the game away by hitting 6-of-7 free throw attempts the final two minutes.

NASHVILLE, Tenn. (KT) — For the first time in five years, Kentucky won’t be in the finals of the Southeastern... read more