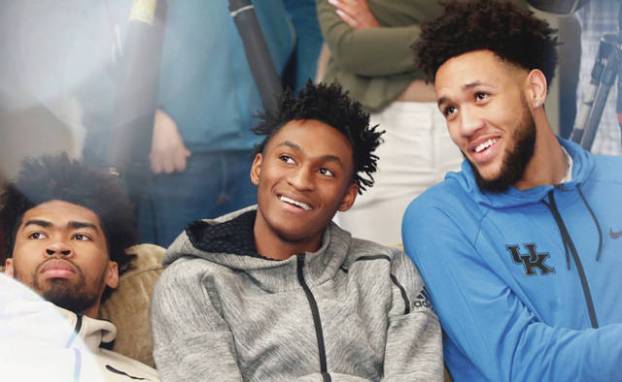 LEXINGTON (KT) — Kentucky’s path to the Final Four will begin in the Sunshine State.

The Wildcats (27-6), the No, 2 seed in the Midwest Region, will take on Abilene Christian at 7:10 p.m. Thursday in the opening round of the NCAA Tournament in Jacksonville. The Wildcats (27-6) won the Southland Conference Tournament and received a bid to the Big Dance for the first time in school history.

Although a path from Columbus to Louisville was a preference, Kentcky coach John Calipari said the seed was “fine.”

“I thought there was a chance we would play in Louisville, it wasn’t slim, but none … but that’s fine. … This time of the year it’s one-and-done and we’ve used this year to prepare these guys for this tournament,” he said.

It marked the seventh time in school history the Wildcats have received a No. 2 seed in the tourney. Kentucky was seeded second in 2017 and fell to North Carolina in the South Region finals in Memphis.

Tennessee, which defeated Kentucky in the Southeastern Conference Tournament semifinals on Saturday in Nashville, is the No. 2 seed in the South Region and will open the Big Dance in Columbus, Ohio.

Calipari said the team’s loss to Vanderbilt in the 2012 SEC Tournament was “the best thing to happen” for his team. The Wildcats went on and won the school’s eighth national championship.

“It is what it is,” Calipari said. “That’s how (the selection committee) felt.”

Kentucky defeated North Carolina 80-72 on Dec. 22 in the CBS Sports Classic in Chicago, but Calipari hasn’t paid much attention to the Tar Heels since that time.

“Carolina is playing good, their point guard is good,” Calipari said. “I’m not worried about them, we’ve got to get through Abilene Christian, that’s all I’m worried about right now.”

If both teams win their opener, Kentucky and Seton Hall could meet for the second time. The Pirates edged the Wildcats 84-83 in overtime on Dec. 8 at Madison Square Garden in New York. Despite the possibilities, the Cats aren’t looking ahead.

“Coach told us to just have tunnel vision and focus on what’s in front of us. There’s no need to get ahead of ourselves,” Kentucky senior Reid Travis said. “Now that (the pairings) are set in stone, we’re excited to see the scouting report and prepare for the game.”

Kentucky freshman Keldon Johnson said the Cats are “just hungry” following Saturday’s loss to the Volunteers in the SEC Tournament.

Overall, the SEC landed seven teams in the tournament. Mississippi State is a No. 5 seed, while LSU landed a three seed in the East.

Florida is No. 4 in the West. Mississippi (No. 8) landed in the South Region and Auburn is a No. 5 seed in the Midwest.

“All of them are dangerous,” Calipari said of the SEC. “This league has prepared everybody and it really didn’t beat anybody down. They were all challenges. No one was getting beat by 30 (points). The league prepared all of us for this (tournament).”

Murray State No. 12 in the West, Northern Kentucky is a 14 seed and will take on Texas Tech. Louisville is a No. 7 seed in the East and will play Minnesota in the opening round.

Ohio Valley Conference member Belmont made the field and will play Temple in a First Four matchup Tuesday in Dayton. The winner will play Maryland in the East Region.

“They deserve to be in it and who wants to play them? Calipari said. “I mean go ahead, they’re going to take 30 threes. They’re going to fly, run their stuff and execute. I don’t want to play them either. That’s not a good one to play.”