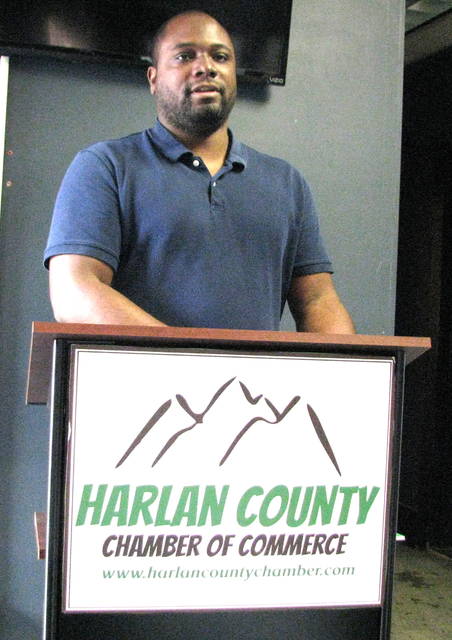 The Explore Kentucky Initiative Founder Gerry James spoke to the Harlan County Chamber of Commerce about the potential of outdoor recreation and tourism at Wednesday’s meeting.

The Harlan County Chamber of Commerce held its monthly meeting Wednesday at The Portal. Their spring speaker series continued with Explore Kentucky Initiative Founder Gerry James speaking about the potential of outdoor recreation and tourism in Harlan County and eastern Kentucky.

Around the time the social media app Instagram first took off, James began using its platform to share pictures of his outdoor adventures when he realized its potential.

The Explore Kentucky Initiative is now a social enterprise dedicated to promoting an active lifestyle through adventure in Kentucky’s outdoors, according to Kentucky Tourism.

James elaborated on the work they have done, saying “we’ve done a lot of things.”

“A lot of stuff I do comes from people asking me if I can,” James added.

The EKI offers guided trips, event planning, conservation events and assists groups around the state to help educate people about the opportunity for more outdoor adventuring.

One particular event mentioned was the Kentucky Waterman Series. James noted his love for the ocean provided a push for the event. The series is a paddle sports league offering different distance races and race classes for both men and women.

“Now in its third year, this all-inclusive series guides paddlers of all skill levels on an amazing journey across the state’s scenic waterways and lakes through several amazing paddle sports events,” EKI’s website says.

“Here in Harlan County, you all have a lot of assets,” James said.

Martins Fork Lake, near Smith, was used as an example of one of the county’s biggest assets.

In order to fully utilize all aspects of the industry, James says respect to locals and the area is a must.

James says he looks forward to helping the county plan different events and added that adventure tourism is a viable industry, meaning increased revenue for the county and state.

• The chamber announced the 18th Annual Cawood Ledford Boys & Girls Club community dinner and reverse raffle, scheduled for May 3 at 6:30 p.m. For this year’s dinner, they will have a derby theme to go along with derby weekend;

• The chamber announced the 421 Yard Sale will be May 3-4 in the old Belk parking lot. It will be $10 per day to set up and it will last from early morning into the evening.