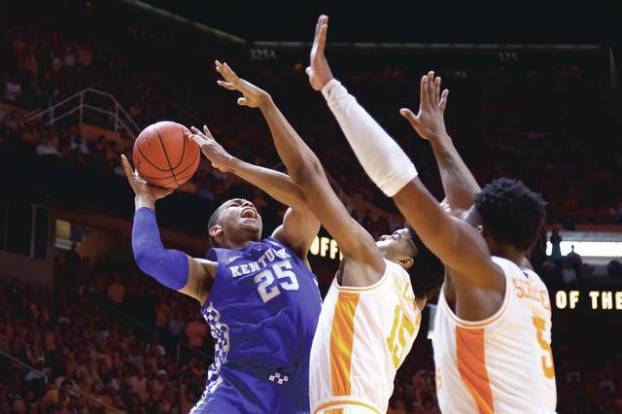 Vols turn the tables in rematch with UK

KNOXVILLE — Kentucky was without its senior leader and it showed in a 71-52 loss at Tennessee Saturday.

The fourth-ranked Wildcats (24-5, 13-3 Southeastern Conference) won two straight after Reid Travis went down with a strained knee in a 66-58 loss at Missouri on Feb. 19, but defeating the Volunteers for the second time this season proved to be a harder task without Travis. Kentucky defeated No. 7 Tennessee (26-3, 13-2) soundly 86-69 two weeks ago in Lexington.

This time it was all Tennessee.

Kentucky coach John Calipari admitted not having Travis in the post was a difficult hurdle for the Wildcats to overcome, but said his absence wasn’t an excuse for his team’s performance, which featured their lowest scoring output of the year and worse defeat since an embarrassing 118-84 setback to Duke in the season opener on Nov. 6 in Indianapolis.

Kentucky freshmen Tyler Herro, Keldon Johnson, and Ashton Hagans combined for just 17 points, while sophomore PJ Washington carried the load for the Wildcats with 13 points despite playing just 10 minutes in the first half. Immanuel Quickley tallied eight for the Wildcats off the bench, followed by Nick Richards with eight points and seven rebounds.

Like his coach, Quickey wasn’t pinning the blame on not having Travis in the lineup.

“There’s no excuse for what we came out and did today,” he said. “There was no effort and no toughness.”

Still, the Wildcats lacked the physical presence from Travis they needed inside to counter the Volunteers, who scored 28 points in the paint. Most of those buckets were scored by Tennessee point guard Jordan Bone, who led the hosts with 27 points and Calipari said the Wildcats missed Travis’ toughness in the post.

“His consistency of play is amazing,” he said. “The way Nick (Richards) played in the first half, why not the second half? … Reid is going to give you what he gives you every minute he’s on the floor. We miss that consistency. … We don’t have the same team, Reid is not here and you’re going to have a role reversal like that.”

Richards said the Wildcats “didn’t bring energy from the jump.”

“They brought more energy than us,” he said.

The reality of not having Travis on the floor really sunk in after Washington picked up his second foul at the 10-minute mark of the first half. To make things more difficult, the Wildcats went more than nine minutes without making a field goal as the Volunteers built a lead that blossomed to 20 points in the second half, while Kentucky failed to get closer than 14 points down the stretch.

“That was a big play — a huge play,” Calipari said of the second foul on Washington. “I’m not saying the call had anything to do with do (anything), but that changed how we had to play in the first half without Reid. I’m sitting there thinking, ‘where are we going with this?”

Not only was Calipari trying to figure out how to maneuver on both ends of the court without Travis and Washington, but the players also had a hard time finding ways to score and making the proper adjustments.

“They played, with a purpose and it was the first game in a while where we did not play for each other,” he said. “It was kind of like, every man for himself. … The team that I’m coaching, they absolutely need each other. They’ve got each other.”

Calipari also was disheartened by his team’s lack of execution in the final five minutes.

“We had a chance to get that thing to seven or eight points,” he said. “There was only one guy thinking we could get the game to seven or eight (points) — me. That was it. No one else and I told them, why would you not think that way?’

Although a loss that dropped the Wildcats to third place in the conference standings, Calipari is optimistic his team can recover going into the final week of the regular-season. Kentucky plays at Mississippi Tuesday, followed by a home finale against Florida Saturday.

“This is one game,” Calipari said. “They haven’t lost here in two years. For us to win without Reid, we were going to have to play one of the best games in the last 10 years.”

It didn’t happen and the Wildcats were Rocky Topped in Knoxville for the fourth straight season.

CORBIN — Making their fourth straight appearance in the regional semifinals and the seventh in 11 years of the program,... read more