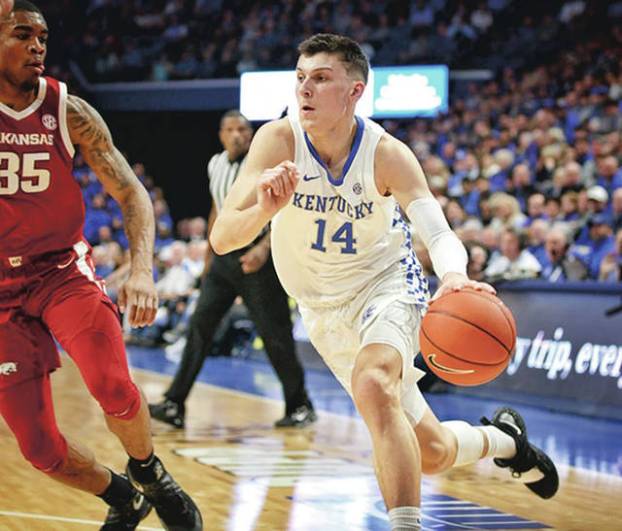 LEXINGTON, Ky. (KT) — Tyler Herro was the hero for Kentucky on Tuesday night.

The freshman guard scored a career-high 29 points to lead the fourth-ranked Wildcats to a 70-66 triumph over Arkansas. The victory kept Kentucky (24-4, 13-2 Southeastern Conference) in a first-place tie with LSU in the Southeastern Conference standings with there games remaining. The comeback was Kentucky’s largest of the season.

“They came in here and played. They also defended, they also fought, they drove the ball, they went to the rim. We just happened to make a run in the second half and beat them. But they deserved to win this game. But I’m happy for my team.”

Kentucky trailed by 15 early in the second half before rallying to notch its seventh consecutive victory over the Razorbacks. Herro sank a 3-pointer with seven minutes remaining that capped a 15-3 run and gave the Wildcats a 54-51 advantage. Kentucky made five of six free throws — including two by Herro — in the final 26 seconds to hold off Arkansas.

Herro made nine of 10 field goals, including five shots from long range. Herro also knocked down all six of his free-throw attempts and has missed just one shot from the charity stripe since an 80-72 win over North Carolina on Dec. Dec. 22.

“He made baskets when we broke down,” Calipari said. “He played well.”

Arkansas’ players werent surprised by the performance by Herro.

“Coming into the game, we knew what we were going to see from him and he delivered,” said Arkansas guard Isaiah Joe, who led the Razorbacks (14-14, 5-10) with 19 points.

“They did a good job of finding him,” Arkansas coach Mike Anderson said.

Kentucky, which struggled in the opening half and committed 12 turnovers, but had just three in the final half to complete the successful comeback.

“I have never seen this before,” Calipari said. “One — do you know what that means? They’re just out there playing against the Washington Generals. They’re moving it and doing whatever they want, passing it and doing whoever they want to give it to and, they have one turnover. I never heard of that. At least against one of my teams, I never heard of it. And so in the second half they only really had six, but we only had three. So we got more aggressive, we got our intensity, our fight jumped up and good rebounding and some other stuff.”

Cardinals advance with win over Harlan

CORBIN — Heartbreaking losses the last two years, to Harlan County in the semifinals in 2017 and Corbin in the... read more