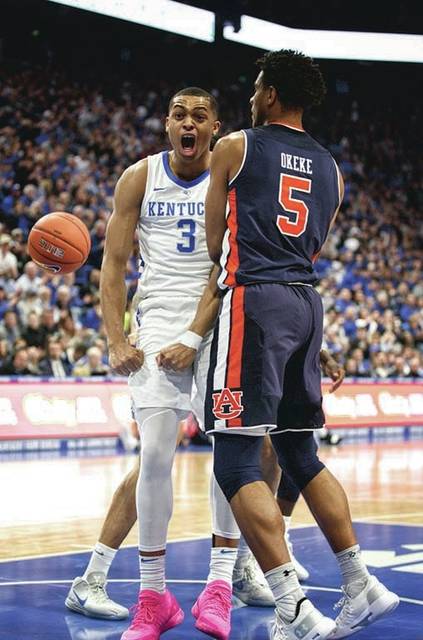 LEXINGTON (KT) — PJ Washington set the tone and the rest of his teammates followed and led the Wildcats to an 80-53 win over Auburn on Saturday at Rupp Arena.

“He started us off,” Kentucky freshman Keldon Johnson said. “We just followed and followed and kept riding off that energy.”

Washington scored 24 points — five from tying his career high — as the fifth-ranked Wildcats swept the Tigers to move into a first-place tie with Tennessee and LSU going into the final two weeks of the regular season. It was also the team’s first victory without senior leader Reid Travis, who sprained his ankle in a win over Missouri earlier this week in Columbia.

The victory was not only Kentucky’s third straight, but moved Wildcats coach John Calipari into second place ahead of former coach Joe B. Hall as the school’s all-time winningest coach. Calipari is 298-68 in 10 seasons with the Wildcats. Hall compiled a 297-100 record in 13 seasons and led the Wildcats to a national championship in 1978.

“No one should go by (Joe B Hall), so coach Hall just asked me to vacate any games that go by him,” Calipari said. “I said they have already vacated some of my games. Maybe we’ll just vacate some more and at the end of the day I’ll be one less than him.”

For Washington, It was the sixth straight time he has led the team in scoring and he has continued to improve going into the final stretch of the regular-season.

“He’s not the same player, and the biggest thing is, he got in great condition,”Calipari said. “Now he can play basketball and, are you ready for this, you can think. If you’re not in shape, your whole thought is about, I’m dying out here. You’re not thinking ahead. You’re not anticipating. He’s in great, great condition. And he’s playing like the best player in the country right now. He really is.”

Even Auburn coach Bruce Pearl has noticed a difference in Washington.

“He had that ability a year ago. I’ve seen this, but now it’s being brought out,” Pearl said. “He’s playing with great confidence, he’s playing a great role, and he’s been consistent with the things that he’s doing. He’s big and strong enough to physically dominate the most physical and powerful forwards in the country. Yet, he’s quick enough and skilled enough to be able to step on the floor and do things like a big guard. National player of the year candidate without question.”

Washington made just five 3-pointers his entire freshman season but has worked on his outside shooting in an effort to become more of a complete player.

“They were denying me in the post and I was just hitting shots and just kept shooting,” he said. “They were going in and fortunately we won the game tonight.”

In addition to Washington’s performance, which included a a career-high five 3-pointers, the Wildcats used a collective team effort to help ease the absence of Travis in the post. Nick Richards and EJ Montgomery combined for 10 points, 10 rebounds and six blocked shots, while Keldon Johnson just missed a double-double eight points and 17 rebounds, including 14 on the defensive end of the court.

Johnson said his main objective was to make things easier for the Wildcats in the post and addd the team had to play “even” harder without Travis in the lineup.

“We knew we had to make up for Reid’s absence,” he said. “I knew I had to go in and hit the glass extra hard today.”

Calipari sensed his team was ready during the early-morning shoot around prior to the contest.

“The kids performed (and) they have been working,” he said. “We had a shoot-around early this morning, and guess what, they were great. They were focused. They were engaged. They listened. There was no one pouting or, you know, and this is a young team.”

He also knows it took a group effort to defeat the Tigers and overcame the absence of Travis.

“They all understand without Reid (Travis), we’re going to have to do this together and I think they all came together and did it, he said. “This was an effort on both sides of the ball.”

LOG MOUNTAIN — It was a long, and often painful, journey for the Middlesboro Yellow Jackets since they won their... read more