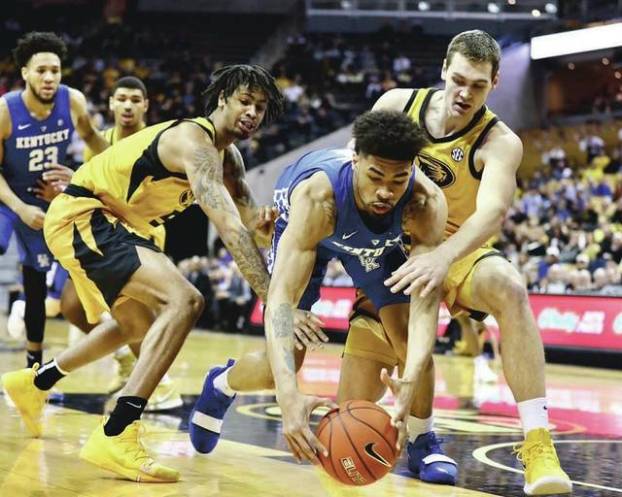 Kentucky’s Nick Richards battled for a loose ball in Kentucky’s 66-58 win over Missouri on Tuesday night in Columbia. Richards finished with seven points.

Cats hold off comeback to down Missouri

Missouri has only beaten Kentucky once in school history. The fourth-ranked Wildcats avoided a repeat of last year’s setback in Columbia with a 66-58 victory Tuesday night at Mizzou Arena.

Kentucky (22-4, 11-2) remained one game behind first-place Tennessee and LSU in the Southeastern Conference standings with five games remaining. The Volunteers rebounded from their loss to Kentucky with a 58-46 win over Vanderbilt Wednesday night. LSU takes on Florida Wednesday night in Baton Rouge.

Kentucky collected its fifth consecutive road win after dropping the conference opener at Alabama. The host Tigers (12-13, 3-10) led for 42 seconds in the first half, but the Wildcats used a 9-0 blitz later in the half to create adequate spacing and notch their second consecutive victory since last week’s 73-71 loss to LSU that snapped a 10-game winning streak.

“For us, this is a big-time win — it’s a road win in this league,” Kentucky coach John Calipari said. “You win on the road in this league, you’ve got something done.”

Nick Richards gave the Wildcats a lift in the first half and finished with seven points. Richards added four rebounds, while EJ Montgomery collected two of the team’s three blocked shots in the contest.

“I took air out of the ball a little bit (down the stretch),” Calipari said. “I was just trying to get out of here (with a win).”

Kentucky senior Reid Travis suffered a sprained right knee after colliding with teammate Keldon Johnson while going up for a rebound with 10:24 remaining. Travis finished with three points and a pair of rebounds in 13 minutes of action.

Kentucky senior Reid Travis suffered a sprained right knee after colliding with teammate Keldon Johnson while going up for a rebound with 10:24 remaining. Travis finished with three points and a pair of rebounds in 13 minutes of action.

“His knee was bothering him,” Calipari said. “We’ll get the MRI and go from there and see. Hopefully, he’s going to be OK.”

Calipari said he will be expecting more from Richards and Montgomery in the future.

“We coach every kid like they are a starter,” Calipari said. “Because of this reason (and) say (Travis) is out a week or two, and somebody says you should have played more, now you’re going to play more. Have at it, let’s see how you do now.”

Calipari notched his 297th career victory at Kentucky and tied longtime and retired Kentucky coach Joe B. Hall for second place on the school’s all-time list. Hall compiled a 297-100 record in 13 seasons with the Wildcats. Calipari currently is 297-68 in his 10 seasons with the Wildcats. The late Adolph Rupp went 876-190 in 41 seasons at the helm.

“I wish I had not (tied Hall),” Calipari said. “What coach Hall did for Kentucky, follow an absolute (legend) and maybe one of the greatest ever to coach this game … and he had to walk in and follow Adolph Rupp and then get to Final Fours and win a national title. What he did here and how he did it (is amazing).

“Now he’s my mentor and my friend. From Day 1, he’s been in practice trying to get me to play that crazy 1-3-1 (defense). Our fans have been so great to him and you want his place in history.”

LOG MOUNTAIN — During a first half when they scored only 14 points, the Harlan Green Dragons looked like a... read more