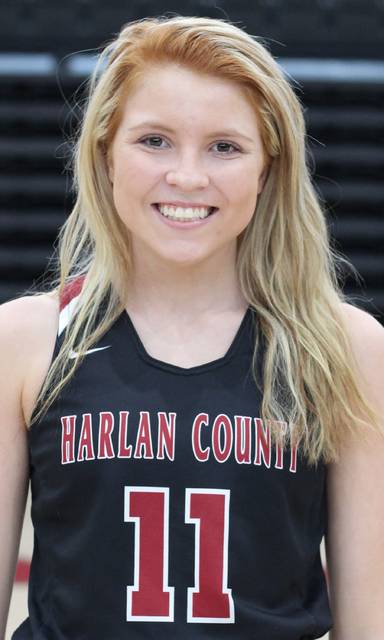 BARBOURVILE — With most of the 13th Region title talk revolving around North Laurel, Clay County and South Laurel, many people tend to forget the Harlan County Lady Black Bears are the defending 13th Region champion. They let it be known loud and clear Friday that the road to Rupp Arena could very well still go through Harlan County by disposing of red-hot Knox Central, 76-48.

“Harlan County is a very good team, and they were without one of their better guards (Phebe McHargue) tonight, and I thought we’d be able to take advantage of that, but we didn’t,” Knox Central coach Jamie Sowders said. “We couldn’t handle their pressure tonight, and we turned the ball over way too many times. Plus, we couldn’t throw the ball in the ocean, it’s a tough loss.”

McHargue has an injured finger but is expected to be fine for tournament play, according to coach Debbie Green.

The game was close in the first quarter with Harlan County clinging to a 15-13 edge going into the second period, but the Lady Bears got hot from 3-point range and connected with four 3-pointers to begin to pull away in the second quarter. Reanna Middleton and Jacey Lewis each hit two 3-pointers apiece during the period while scoring eight points apiece. Katelyn Johnson added 10 of her 18 points to help push the Lady Black Bears’ lead to 45-19 at halftime.

Harlan County put the finishing touches on its win during the second half by outscoring the Lady Panthers, 31-29.

“I’m very disappointed with the loss,” Sowders said. “This is our last home game, and I thought we’d come out and play better than we did. “We just weren’t ready to go,” he added. “Hopefully, this game is behind us now. I want to see more fight out of us. I thought when we got down midway during the second quarter, I lost them. We have to do better.”

Emily Davis led Knox Central with 17 points during her final game at home, while Presley Partin added 12 points and Caylan Mills finished with 10.

“If you don’t play well now, you’re going home,” Sowders said. “We cant afford to overlook anybody. We’ve got to play hard on every offensive possession and defensive possession. We play Barbourville and if we don’t come ready to play, they can send us home, and so can Lynn Camp and Pineville.”

Whitley rallies from 9 down to edge HC

With perhaps the toughest test in the 13th Region awaiting his team next week in the opening round of the... read more