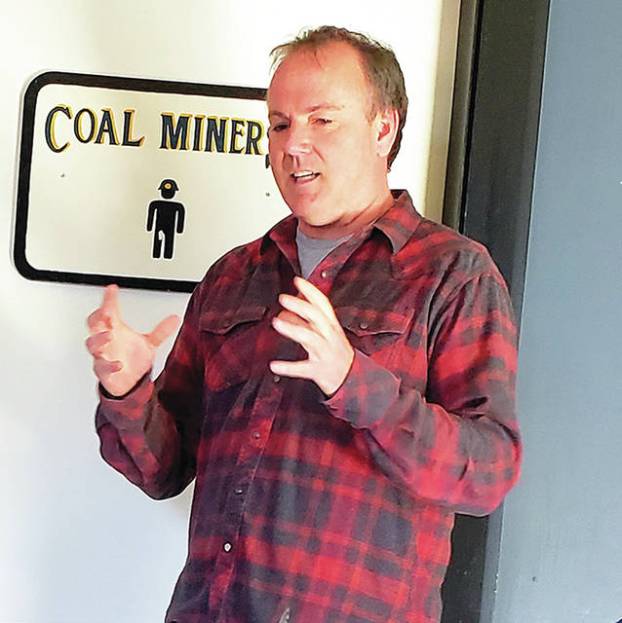 JRL Coal General Manager John Quintrell spoke at Wednesday’s Harlan County Chamber Of Commerce meeting on the outlook of coal in the region.

JRL Coal’s general manager John Quintrell was the first of an impressive list of speakers to discuss potential and promise in the mountains as part of the Harlan County Chamber of Commerce’s Spring Speaker Series.

While there are issues in the coalfields that need addressing, Quintrell presented a bright outlook for the future of coal in Appalachia, saying the area’s greatest resource is its people. He also pledged partnering support with his coal company to Harlan County government, as well as the Harlan County Chamber of Commerce, in finding ways to address issues that prevent the economy from being as productive as it could be.

“We want to facilitate a good relationship,” Quintrell said. “When you all succeed, we succeed.”

Harlan County Chamber of Commerce President Geoff Marietta said Quintrell did an outstanding job as the chamber’s first Spring Speaker Series, setting a tone of hope in the hills with the report he gave concerning JRL Coal’s success and the overall outlook for the coal industry in southeast Kentucky. Currently, JRL Coal has 250 employees, and hopes to see that number grow. Marietta said he was excited for the other scheduled speakers to visit Harlan, as well.

“Every person I reached out to responded immediately about their desire to visit Harlan County and meet the folks here,” Marietta said. “Harlan has a special place in many Kentuckians’ hearts and they want to do whatever they can to support our community and economy.”

Quintrell, originally from Georgia, said he had now made Harlan County his home. He said when he first arrived to manage his coal operations in Harlan, he slept on an air mattress in his office for over a year. Now, the Georgian said he was pleased to become a Harlan Countian. He said he hopes his role as a manager of a major coal producing company in Harlan will bring growth to the area as well as encouragement to residents.

“The people, here, are our greatest resource,” Quintrell said. “The workers are dear to my heart. I am continuously touched by the strong bond of these men. They are a hard-working people. And the wives — they deserve credit, too, because of their sacrifices and support.”

Quintrell told chamber members that JRL Coal has its main operation in Mary Helen, a deep mine in Putney, as well as shops in Putney and in Lynch. He said they were keeping about 40 coal trucks on the road a day, and that they were in need of machinists to work. He also told chamber members that his company’s coal was used for power generation in the south, and the majority of their coal was shipped to South Carolina, Florida and Tennessee. Quintrell also said he projected that by November 2020 his company will employ 360 workers. The company is in the process of securing a five-year contract with a major consumer.

Issues facing the industry, according to Quintrell, were the region’s drug problem and the scarcity of flat land. He told chamber members that his company was willing to partner up with Harlan County leaders to address the drug problem in an effort to build a stronger and more capable workforce, and to also come up with more flat land.

“Flat property is needed here,” he said. “There is more we can do as a company — we have the plans — if we had flat property. We just can’t seem to find the places, here, to carry out our plans. We have our own engineers, too, so we would be happy to lend our resources.”

Marietta told chamber members that Harlan County should be thankful for Quintrell’s interest in the area, because as the coal decline saw coal companies pulling out, Quintrell and JRL Coal was “steamrolling” in.

Over the next few months, the Harlan County Chamber of Commerce will feature other speakers as part of the organization’s Spring Speaker Series. On March 13, Gerry James, founder of Explore Kentucky, will be the featured speaker. James has led several hikes in Harlan County at Blanton Forest and Pine Mountain Settlement School. He has built an audience of more than 150,000 social media followers through his work with Explore Kentucky. The April 10 speaker will be Regina Stivers, deputy secretary of Kentucky’s Tourism, Arts, and Heritage Cabinet. Jared Arnett, executive director of SOAR, will follow in May.

The public is welcome to attend the Harlan County Chamber of Commerce Spring Speaker Series. The chamber meets on the second Wednesday of each month at noon at The Portal restaurant in downtown Harlan.