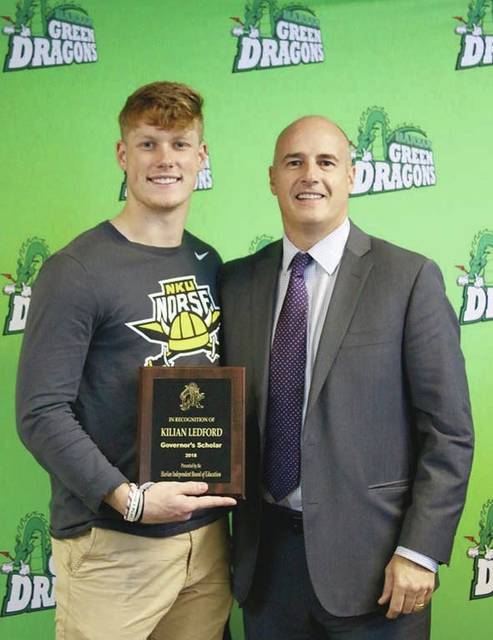 Harlan senior Kilian Ledford is pictured with Harlan Independent Schools Supt. C.D. Morton after Ledford was honored for being a Governor’s Scholar. Ledford, a four-sport standout, recently received the Wallace “Wah Wah” Jones Award. He will be honored on March 5 in Lexington.

The sixth annual Wallace “Wah Wah” Jones Award will be presented to Kilian Ledford from Harlan High School during the 2019 Mr. and Miss Kentucky Basketball Awards Ceremony on March 5 in Lexington.

Nominees were submitted from across the state to the Jones family for this prestigious award for senior multi-sport athletes who excel equally in their classroom and contribute greatly to their community.

“All of the nominees were very deserving and this decision gets more difficult to make each year,” said Wallace “Wah” Jones Jr.

Ledford, a senior at Harlan High School, has played basketball, baseball, football and ran track during his high school career, while maintaining a 4.0 grade point average. Ledford’s career includes a comeback after breaking his wrist during a football game his junior year. Kilian continued the football season and started the basketball season with a broken left wrist until surgery was scheduled. In that time made his 1,000th point on the basketball court.

“I am humbled to be selected as the Wah Wah Jones award winner and proud to represent Harlan High School,” Ledford said. “It is extra special since Harlan High is Wah Wah’s alma mater. I am sure there are many deserving student athletes who share the love of sports like I do. I have been fortunate to be surrounded by coaches who understand the value of participating in a variety of sports. Attending a small high school has also given me the opportunity to really have an impact on each sport I played. The friendships and support of my teammates have helped be become the student athlete that I am. This honor represents every teammate and coach I have had the privilege to play with over the years.”

“He is a four-sport athlete, a Governor’s Scholar, a MathCounts scholarship winner and a student who possesses outstanding character wherever he is placed,” said Tara Posey, Ledford’s track coach. “There have been times when I’ve pushed him out of his comfort zone and asked him to run a middle distance race when he is a sprinter. Just as I suspected, he rose to the challenge and posted a time, in that unfamiliar distance, that shot him to third in our region.”

Ledford said that through his injury and the training required to come back he has learned to persevere in the face of adversity by keeping a strong mindset and trusting the greater plan of those around him. He has also found that he wants to pursue a career in the sports medicine field, particularly in physical therapy.

In addition to basketball and football, Jones was a pitcher with the Wildcats and a member of the UK track and field team. He won a gold medal in the 1948 Summer Olympics. After college, Jones went on to play in the National Basketball Association with the Indianapolis Olympians.