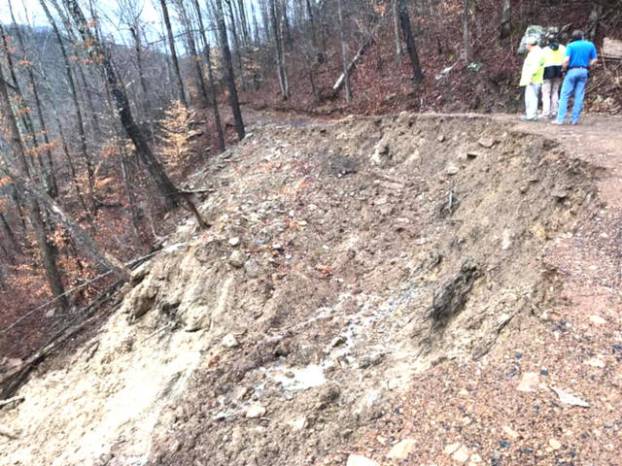 KY 72 near Pruitt’s Curve was reduced to one lane after a rock an mudslide covered the road Thursday morning.

KY 72 reduced to one lane after mudslide

Harlan County Judge-Executive Dan Mosley declared a state of emergency Thursday after a rock and mudslide reduced a portion of KY 72 to one lane. The slide occurred near Pruitt’s Curve and Highway 2425. It is in the same area where a state project took place within the last two years to prevent rock and mudslides from occurring.

Highway officials were on scene working to cleanup the slide and flag traffic but more material continued to fall.

“We have expressed concerns to highway officials over the last several weeks about this area due to reports of debris falling at different times and damaging vehicles,” said Mosley. “Due to the heavy rainfall last night combined with already saturated ground, this has caused an even more significant issue.”

More than 300 households in Harlan County have been impacted as a result of the slide. In the state of emergency declaration, Mosley is asking the state to use all necessary measures within its resources to properly stabilize the mountain side, provide safe experience for those traveling the highway and ensure that those who live in the area can receive all services they are entitled to receive during the process.

The Harlan Enterprise will continue to update you as more information becomes available.