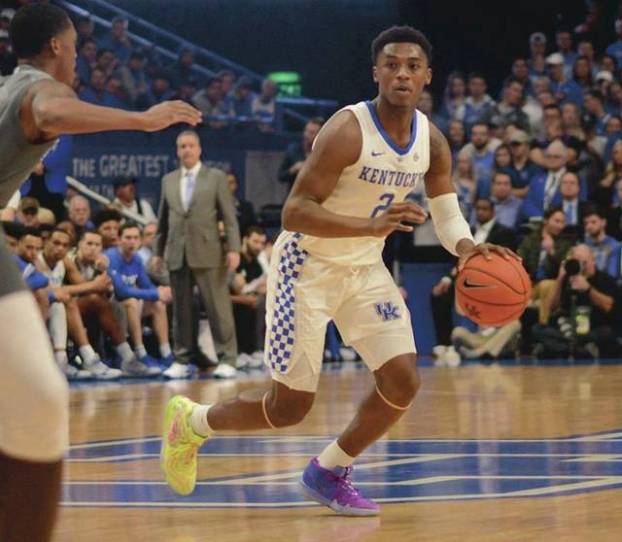 The eighth-ranked Wildcats prepared for the Top 10 showdown against the Jayhawks with a 76-55 victory over No. 22 Mississippi State Tuesday night. Kentucky extended its winning streak to five games going into the SEC-Big 12 Challenge this weekend.

Kentucky coach John Calipari improved to 11-0 against Mississippi State. Kentucky notched its 11th consecutive victory over the Bulldogs (14-4, 2-3 SEC). Calipari was pleased with the way his team performed coming off an 82-80 win at Auburn last weekend.

“We need to be more steady in how we do this and we are,” he said. “The Kansas game is really, really big, because it’s the next game. We weren’t worried about Kansas. … I can’t tell you how they play. This (game) was about beating a Top 20 team, a team that has played well all year. A team that makes nine threes per game and missed some shots, thank goodness. They missed a lot of shots they normally make.”

Kentucky (15-3, 5-1 Southeastern Conference) placed two players in double figures, paced by PJ Washington, who finished with 21 points. He scored 12 of those in the second half as the Wildcats pulled away from the Bulldogs down the stretch and ended the contest with a 12-2 run. Washington added six rebounds and tied a career-high with four blocked shots.

Tyler Herro followed Washington with 18 points and tallied 11 of those in the first half. Herro was a perfect 3-3 from long range, while Kentucky guard Ashton Hagans added five points, nine assists and two steals.

Keldon Johnson just missed double figures with nine points and tallied seven straight, including a slam dunk and a 3-point play during a 10-0 run in the first half after the Bulldogs scored the first four points of the contest.

Kentucky forward EJ Montgomery contributed with five points and added a block and a steal. Montgomery splashed a 3-pointer, but his biggest contribution was a block on the defensive end that led to Herro’s nifty one-handed pass to Nicholas Richards for a slam dunk.

“That changed the game,” Calipari said of Montgomery’s block.

Montgomery said he’s getting more comfortable on the court as the season progresses.

“(Coach) just tells me just to fight and the other stuff is going to happen for me, scoring and stuff like that,” he said. “He just wants me to just fight, go out there and rebound and play as hard as I can.”

“Sometimes you have those nights where you’re struggling from 3-point range,” Mississippi State forward Robert Woodard said. “Tonight you could say it was one of our nights.”

“We were rushed offensively tonight,” he said. “We just never got on track offensively. We took some bad shots in this game tonight. We need to do a better job of executing and learn from this.”

Calipari was relieved the Bulldogs struggled from behind the arc.

Lady Dragons pull away for win over Jenkins

Up by two heading into the final quarter on Tuesday, Harlan needed to hit its free throws in order to... read more