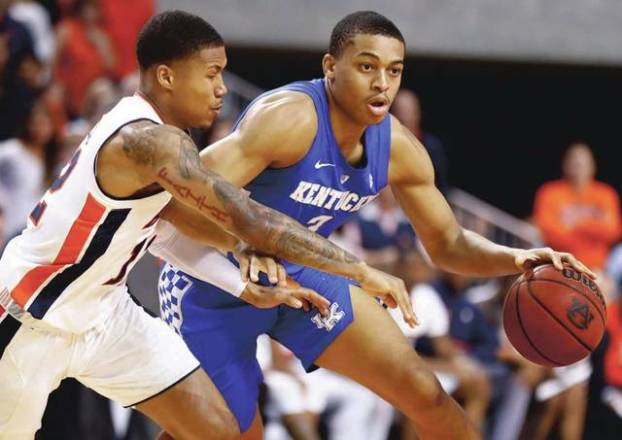 Keldon Johnson scored 20 points in Kentucky’s win over Auburn on Saturday. The win was Kentucky’s fourth in a row, including the last two on the road.

Kentucky (14-3, 4-1 SEC) fended off a late Auburn rally and escaped with an 82-80 triumph over the Tigers Saturday at Auburn Arena. The win was the fourth in a row for Kentucky, which dropped a 77-75 loss to Alabama earlier this month in Tuscaloosa. Auburn slipped to 13-4 overall and 2-2 in the league.

“We’re playing a veteran team that’s been through wars and have been through games like this (and) made shots,” Kentucky coach John Calipari said afterward. “They were down 17 and never stopped. Guess, what? Neither did we. … In a game like this, it’s fight. If you couldn’t fight, you couldn’t be in there. The game was physical (and) you’ve got to play.”

Calipari said the outing was perhaps Kentucky’s best performance of the season in a hostile environment.

As expected, Auburn launched 30 treys — five less than Calipari predicted — and made 13 of those, including eight in the second half, most of which were by Bryce Brown. Brown made six shots from long range, including five in the second half that kept the Tigers within striking distance down the stretch.

“When you have a team that makes threes (like that), they’re never out of the game,” Calipari said. “My thing was, make them drive in transition. … We’re lucky to get out of here alive.”

Auburn grabbed the lead at 80-79 on Bryce Harper’s 3-pointer with 32 seconds remaining, but the Wildcats made three of four free throws in the final 25 seconds to seal the deal. The Tigers missed its astro shots — all 3-pointers — in the closing minutes.

“Coach was just telling us to keep fighting,” Kentucky freshman guard Tyler Herro said. “Down the stretch, they’re going to make some plays and hit some shots, but we just had to stay to together and work as a team, lock in defensively and get stops.”

Kentucky countered with some timely shots of their own and connected on six 3-pointers. Johnson and Tyler Herro combined for five of those and got a bounce-back performance from Johnson, the team’s leading scorer, after he failed to score in a 69-49 win at Georgia earlier this week.

Johnson got off to a slow start but used a pep talk from point guard Ashton Hagans early in the first half to get back on track. Johnson finished with 20 points, tying Herro for team-high scoring honors. Even during his slump, Johnson said his teammates kept him motivated.

“He just told me, ‘you’ve got to wake up, man, we need you to play … it’s not acceptable and if we want to be the team we want to be, you’ve got to wake up. I did it for my teammates. They had my back and I had theirs. I took it in a positive way. We may argue on the court, but I know that my teammates want what’s best for me. … If they’re telling me something, they’re not going to do it just because, they do it because they want what’s best for me and best for the team.”

Kentucky, which now has road wins Auburn, Georgia and Louisville to go along with a neutral court victory over North Carolina, keeps improving its NCAA Tournament resume.

“That was a great atmosphere out there,” Herro said. “Sticking together, which is what we did, was good to see. We’ve come a long way since the beginning of the season.”

Calipari and the Wildcats have just three days to enjoy the win before taking on No. 24 Mississippi State Tuesday at Rupp Arena.

“We’ll enjoy this and then figure out what we’re doing next,” he said.

BARBOURVILLE — The Barbourville Tigers might have been a little short-handed, but they were also still fuming after losing to... read more