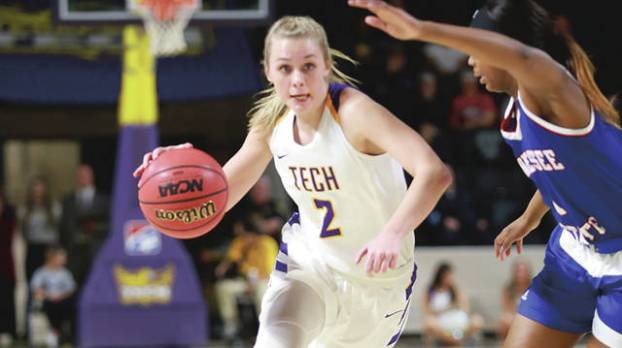 Last weekend, Tech (14-3, 6-0 OVC) shot 60 percent from the field and 54 percent from 3-point range in dropping 99 points on Eastern Illinois in an old-fashioned shootout.

On this night, defense would take center stage, as TTU frustrated Jacksonville State (8-9, 2-4 OVC) for nearly the entire contest, holding the Gamecocks to just 49 points and 33.3 percent from the floor.

The nine-game winning streak is the program’s first since 2010-11.

“Good teams have to win in different ways, and I love the fact that this team is showing it is capable of doing that,” said head coach Kim Rosamond. “Tonight, we had to defend, rebound, and take care of the basketball. We didn’t keep them off the offensive boards as well as we wanted, but we found ways to get stops.”

“In the second half, our offense stalled a little bit, but we didn’t let that affect us on the defensive end. Anytime you can go on the road and hold a team to 49 points, you give yourself a chance to be successful, especially when you take care of the basketball the way we did tonight.”

The 49 points allowed are Tech’s second-lowest total of the season, behind only the 45 given up to Wichita State back on December 2.

The win is Tech’s fourth in its last six meetings against Jacksonville State, but only its second inside JSU’s Pete Mathews Coliseum since December 19, 2012.

“Whenever you play JSU, you have to play really tough in order to have any chance of success, and I thought our kids showed so much toughness tonight. It is never easy to win at Jacksonville. They are the most physical team, and one of the best defensive teams in the OVC. One of our main keys tonight was to match their physicality, and I thought our team did just that.”

While Tech’s 66 tallies are a modest number compared to the figures the team has put up of late, the offense was still efficient, as it committed just 11 turnovers, its lowest mark since the epic victory over Belmont (9).

The Golden Eagles started the game like they were collectively shot out of a cannon. After spotting JSU its only lead of the game at 2-0, TTU ran off 14 points in a row over the next three and a half minutes to force a Gamecock timeout. And with that, the tone had been set.

“The way we attacked and executed offensively to start the game was huge,” Rosamond said. “Our first quarter was one of the better starts we have had this season, and really gave us a boost of confidence for the entire game.”

Jordan Brock scored seven points in Tech’s opening flurry, and finished as the club’s leading scorer for the fourth time in six conference games with 20 points. It gives the sophomore her third 20-point outing of the season, and her eighth in a row in double figures.

She also built on her ridiculous field goal percentage in OVC games, making 7 of 11 field goals to boost that mark to 57.8 percent.

Anacia Wilkinson turned in another fine game off the bench, as she scored nine points, grabbed a team-high nine rebounds, and blocked four shots.

Wilkinson, who is currently ranked sixth in NCAA Division I in blocked shots, has at least one in every game this season, and now has seven tilts with at least four rejections.

She also has at least nine rebounds in each of her last four outings, and has led the team in boards in all of them.

Akia Harris was the other Golden Eagle with double-digit points in the game, as she scored 12 on 5-of-9 shooting.

Her three biggest points came in the waning seconds of the third quarter, when JSU had shrunk the lead to 12.

Just when it looked like the Golden Eagles would finish the period with an empty possession, Harris buried a buzzer-beater triple from about 22 feet to quash the Gamecock momentum.

Jacksonville State would make one more run in the fourth quarter, scoring seven in a row to make it a nine-point game with five minutes left.

However, the Gamecock offense would not be heard from again after that, as Tech closed the game on an 8-0 spurt to leave no doubt in its 17-point victory.

Kentoria Alexander put up solid numbers in several columns of the box score, netting nine points with four rebounds, a team-high three assists, one block and one steal.

Mackenzie Coleman and Taylor Lamb both had four points, Kesha Brady and Lacy Cantrell each scored three, and Abby Buckner had two points to wrap up the scoring for the Golden Eagles. Buckner was also the team’s second-best rebounder with five caroms.

“We’ll go home and enjoy this one, and then we’ll show up Monday ready to prepare for another tough road trip – Morehead State and Eastern Kentucky,” Rosamond said. “We are not going to deviate from what we’ve done to get here, and that includes our thought process. Our record to this point really doesn’t matter, all we’re trying to do is go 1-0 every time we take the floor.”