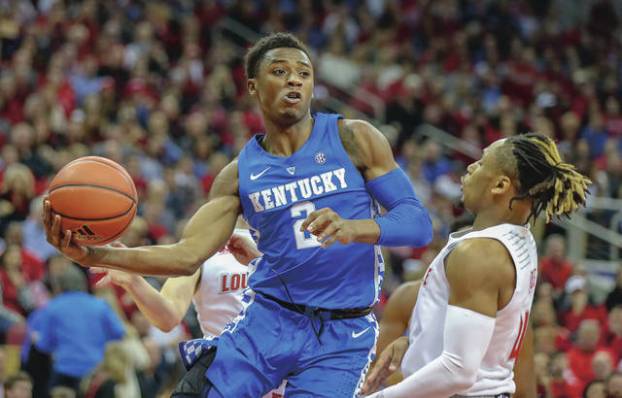 Freshman guard Ashton Hagans has led Kentucky during a recent f0ur-game winning streak. The Wildcats will play Auburn on Saturday.

The Kentucky freshman guard transformed Kentucky’s defense with a knack for collecting steals and disrupting the opposition. Hagans also is developing a name for himself on the offensive end, giving the Wildcats another valuable weapon when it comes to scoring, driving and dishing.

Kentucky has come full circle on both ends of the court and Hagans is the chief cornerstone for the Wildcats, who have won three straight Southeastern Conference games going into Saturday’s showdown at Auburn.

“It starts with Ashton, to be honest with you,” Kentucky coach John Calipari said. “It starts with him. Last year it started with Shai Gilgeous-Alexander. If you have a guy on the ball that cannot guard the ball, you cannot play defense. You’re not going to have a good defensive team. That guy’s gotta be able to guard the ball. And Ashton can.”

“I’m built for this, so I just tried to go out there, play my game, attack the basket,” Hagans said. “If they’re sagging off me, just try to knock down a shot. That’s just coming with being in the gym. Being under Cal, he’s a hard coach. You know every day he wants you to play hard. I just love this game and (I was) just happy to be home.”

If not for a change in coaches from Mark Fox to Tom Crean last spring, Hagans, the Gatorade Player of the Year and Mr. Basketball in the Peach State last season, would have been playing for the Bulldogs. After changing his mind, Hagans re-classified and committed to the Wildcats, a decision that has paid off in big dividends for Hagans, especially since league play began earlier this month.

“Early in the season he’s struggling,” Calipari said. “Struggling to find his way, struggling to be consistent, struggling to play winning basketball. And then there’s a panic, and all of a sudden over the month he starts to get it, he starts to realize. We have a better feel for what he is as a player and now he just plays to his strengths. He’s playing as well as anybody we have on our team.”

The reigning SEC Freshman of the Week missed six of his first seven shots against the Bulldogs. Hagans then overcame the jitters and finished with a career-high 23 points, complete with five rebounds and four steals and assists in his a brief homecoming that featured several friends and family members who supported him at Stegeman Coliseum.

“It rattled him early and it inspired him later,” Calipari said. “But early on, I had to get him out. He missed a couple layups, was rushing a little bit and then he settled in and played the way he needs to play for him and us.”

Hagans has averaged 15.8 points per game since league play began and his scoring production has more than doubled in that span. Hagans credits his improvement to “just staying in the gym, working on your craft.”

“That’s what I’ve been doing lately,” he said. “I’m just trying to get to the next level. That’s why I made the decision to go with Cal, but (when I was) home, I had to try to put on a show.”

And it was a performance to remember for Hagans in front of his friends and family.

Brock named player of the week in OVC

BRENTWOOD, Tenn. – Jordan Brock was named Ohio Valley Conference Player of the Week on Tuesday after lighting up the... read more