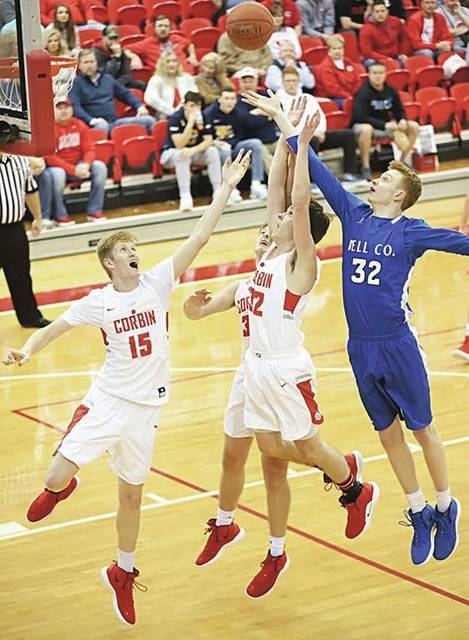 Bell advances with win over Redhounds

One week after suffering a 15-point loss at Corbin in the semifinals of the Cumberland Falls Invitational Tournament, the Bell County Bobcats were a different team in the rematch Wednesday in the 2A Classic at Corbin.

A big offensive second half propelled Bell to a 66-42 victory, earning a showdown against Knox Central for the 2A regional title.

“The kids played an amazing game tonight,” said Bell County coach Frankie Smith. “We were great on defense. Our decision making on offense was phenomenal.”

The 24-point loss marked the first time since January 2014 the Redhounds have dropped consecutive games at home.

“We are disappointed in the loss,” Corbin coach Tony Pietrowski said. “Even with some of our wins here lately, I don’t feel like we have played very well. Sometimes it takes a loss to get that across to your group. We just got to keep grinding. We’re frustrated as a coaching staff and I think our team is frustrated. There are a lot of areas that are fixable, but you know it’s time that we start correcting some errors that we’re seeing a lot of in a lot of games.

“They chased Chase (Sanders) in the first game, and played a 3-2 in this game. That’s the only thing they did different. We’re just missing a lot of things that we pride ourselves on. We’re bringing scouting reports in on the things — we’re missing assignments, and when you don’t play extremely hard, those things start to creep in. We’re just not playing really well right now.”

The teams traded buckets during the first quarter with Corbin holding a 13-12 advantage at the first buzzer. The Bell County defense did a good job of shutting down the Corbin offense in the second quarter, holding the Hounds to only seven points while scoring 11 to build a 23-20 lead heading into the locker room at the half.

The Redhounds connected on only eight-of-39 shot attempts during the game’s final three quarters while hitting five-of-19 shot attempts from 3-point territory. Matthew Taylor was Corbin’s lone scorer in double figures with 19 points.

“I’m disappointed with our attitude and effort towards the game,” Pietrowski said. “To me, this meant a lot. I wanted to be a part of 2A, and continue to advance. It was a heated game last time, and we knew we had them coming in, and they were going to be excited.

Bell County will play Knox Central on Friday in the 2A championship game.

“I really believe that we’re getting better and hope we can continue to improve throughout the rest of the season,” Smith said.

CORBIN — After playing four games in five days and persevering a 10-hour road trip on Tuesday, Knox Central moved one step closer in capturing the basketball program’s first regional championship of any kind since 1970 after defeating Jackson County, 77-41, during semifinal action of the 13th Region Class 2A Tournament on Wednesday.

The Panthers (12-2) turned in a 31-of-60 shooting effort while limiting the Generals to their lowest scoring output of the season, but coach Tony Patterson believes his team can play better.

“Defensively, it was really bad for us,” he admitted. “We didn’t set down and guard, and we didn’t talk. It was like we were in a rut all night. Offensively, we were mediocre, and had no intensity whatsoever. That’s why you coach them. We can correct a lot of things, and we’re going to have to.

“The good thing is we are able to be in the finals Friday against a good Bell County team. It’s going to be a big step for us. I’m going to give our guys the benefit of the doubt. We got back (from Florida) yesterday after a 10-hour drive, and we played four games in five days, so they’re probably wore down — they look like it. They’ll get their second wind, and they’ll be back.”