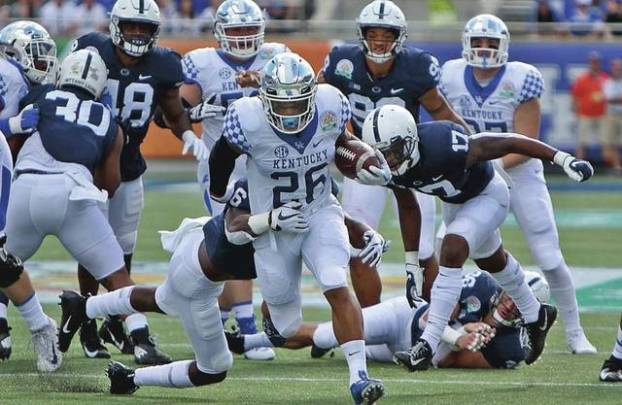 Kentucky running back Benny Snell broke free for a big run during the Wildcats’ 27-24 win over Penn State in the Citrus Bowl Tuesday in Orlando. The Wildcats finished the season with a 10-3 record.

The Wildcats (10-3) reached the double-digit win plateau for the first time since 1977 with an exciting 27-24 triumph over Penn State in the Citrus Bowl Tuesday, ending a four-game postseason losing streak. Kentucky had lost its last three bowl contests, including a disappointing 24-23 loss to Northwestern in the Music City Bowl a year ago in Nashville.

“It was extremely important to this team, for all of us to come home with some hardware, to come home with a trophy,” Kentucky football coach Mark Stoops said. “This team, the seniors and Benny (Snell), they have been so steady the years he has been here and he’s a big piece with our seniors.

“It means so much and has meant so much for this team and this program, it was important to finish, collect the trophy and to win 10 games and win a game on New Year’s Day. We had a great belief in our locker room and we didn’t have to do anything special.”

Kentucky became just the third team in school history to notch 10 or more victories in a single season and avenged a 26-14 setback to the Nittany Lions in the Outback Bowl 10 years ago in nearby Tampa.

The Wildcats had a 10-7 lead at the break but broke the game open in the second half, outscoring Penn State 17-0 in the third quarter. Snell, who became the school’s all-time rushing leader with 71 yards and a pair of touchdowns in the third quarter. Snell, who will forgo his senior season and enter the NFL Draft, finished with 144 yards and two touchdowns in his final collegiate game. Snell provided the tough yards on the team’s final possession to hold off Penn State, which scored 17 straight points in the fourth quarter to make the finish a little more dramatic.

“We were determined to get tis victory,” Stoops said. “They made it close at the end and give Penn State credit. They did not back down and it’s a quality football team and well-coached. You knew they would fight back and they were a hard team and we did the things necessary to close it out. When you don’t have a like Benny, it’s hard to do. The whole stadium knew we were going to run the ball and and grind out a first down or two to ice the game.”

Snell, along with teammates Lynn Bowden and Terry Wilson proved to be a handful for the Nittany Lions, especially in the second half. Bowden hauled in five passes for 84 yards, while Wilson threw for 121 yards.

Kentucky’s defense and special teams played a big role in limiting the Nittany Lions to just seven points in the opening half. Penn State missed a 40-yard field goal had a 38-yard attempt blocked in the second half. Kentucky defensive end Josh Allen collected a pair of sacks, both for a loss and added a quarterback hurry.

The biggest play of the half was a 58-yard punt return for a touchdown by Bowden, the longest return in the Citrus Bowl since 1992. It was all the spacing Kentucky needed to prevent Penn State from obtaining momentum. Overall the Nittany Lions outgained the Wildcats 410-297 but it wasn’t enough to overcome a poor showing in the first two quarters.

Stoops added Bowden was a “game-changer.”

Josh Allen concluded his collegiate career with four tackles, three of which were sacks.

FUN IN THE SUN

Stoops was pleased with the way the Wildcats handled practice and free time during the past week in preparation for the team’s first New Year’s Day game win two decades.

“We had so much fun, it should be illegal, with how much fun we had this week,” Stoops said. “We had a blast with each other, just spending time in Florida and taking it in, but then when it was time to go practice, these guys were locked in and they were competitive and you can do that with a mature group.”

LEXINGTON (KT) — John Calipari gave his Kentucky squad three days off for Christmas but will take advantage of the... read more