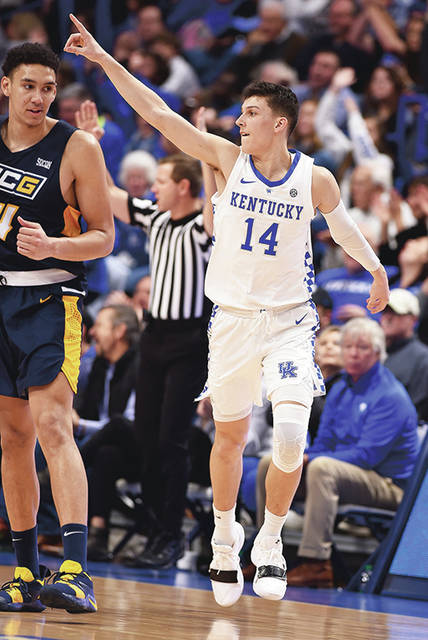 Tyler Herro acknowledged a good play by a teammate against UNC-Greensboro earlier this year. Herro was named SEC Freshman of the Week on Monday.

LEXINGTON (KT) — John Calipari gave his Kentucky squad three days off for Christmas but will take advantage of the time he has with his team this week leading up to the team’s Southeastern Conference opener at Alabama on Saturday.

For Calipari, the Christmas break is his favorite time of the year and it allows the Kentucky coach time to work with his team not once, but two or more times per day to help prepare the Wildcats (10-2) for the remainder of the season.

“We don’t have anything else to do except (play) video games, so we’re practicing,” Calipari said following the Wildcats’ 71-58 win over Louisville Saturday. “We’re together, we’re watching film, we’re going over (game) situations. This is the best time of the year for my team.”

Kentucky inched closer to the Top 10 following wins over North Carolina and Louisville and is ranked No. 13 in this week’s Associated Press Top 25 poll. The Wildcats (10-2) carry a three-game winning streak into the Southeastern Conference opener Saturday at Alabama.

Louisville coach Chris Mack was impressed with Kentucky’s performance against his team last Saturday at the KFC Yum! Center.

“I thought their team played well,” Mack said. “I (think) they’ve turned the corner a little bit from the beginning of the year to now. They’ve improved dramatically.”

Calipari admitted he may have been overly confident following his team’s three-game exhibition tour to the Bahamas last August.

“There were things that happened and I said, ‘I’m not intoxicated by what happened down there’ but I probably was,” he said. “The beginning of the year, we were a bad defensive team. We had a bunch of unwilling passers… we had guys that were so focused on themselves, they couldn’t play for us. I missed it was a coach. But, after I saw it, I was like, ‘all right, we’re going back to these things and we’re going to get better at this stuff.”

Kentucky guard Tyler Herro set a new career high with 24 points against the Cardinals and connected on four of the Wildcats’ six 3-pointers, also setting a career-high for the freshman. Herro was named SEC Freshman Player of the Week on Monday and has averaged 16.7 points per game while shooting 50.6 percent from the floor during the past six games. He also has made 13 3-pointers during that stretch.

Calipari was pleased with Herro’s performance against his team’s in-state rivals. The Kentucky coach also was happy with Herro’s five rebounds.

“There’s been some games where he didn’t thrive,” Calipari said. “So, I’m trying to say to him and Keldon (Johnson) is ‘what do you do to help us win when you’re not making shots? You don’t make shots, don’t worry about it. Do all the other stuff to help us win games.”

Mack added Herro was one of the difference-makers in the contest.

“Give him credit,” the Louisville coach said. “I don’t think I’ve seen a game where he’s made two threes in row all year and he did tonight. He’s a good player.”

LONDON — In a 52-45 loss Saturday at South Laurel in the Legacy Nissan Classic finals, the Harlan County Black... read more