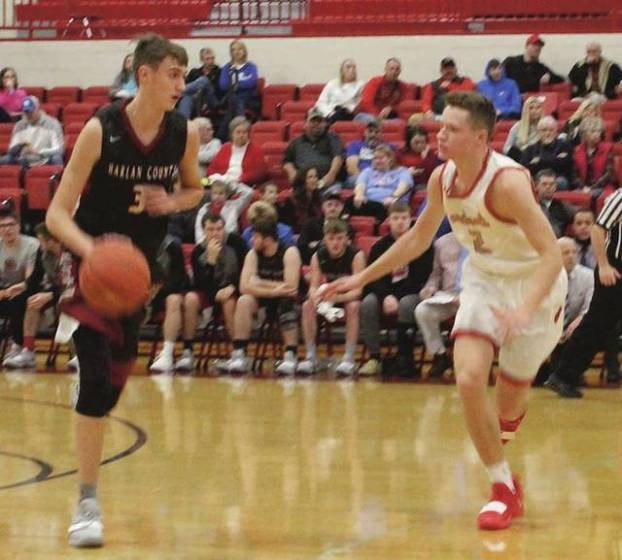 LONDON — In a 52-45 loss Saturday at South Laurel in the Legacy Nissan Classic finals, the Harlan County Black Bears showed they can play with a 13th Region favorite. The next step, according to coach Michael Jones, is to go back to work to clean up the mistakes and find a more consistent offensive attack.

“We have a good week of practice ahead of us, and if we can get all five going on at the same time we’ll be all right,” Jones said. “We have two playing well one game and two the next. It has to be a team effort, and once we do that we’ll be pretty good.”

South Laurel (12-1) won its 12th straight with another strong defensive effort that made the Bears look uncomfortable on offense most of the night.

“It did bother us, but it shouldn’t have,” Jones said. “We’ve worked against stuff like that. They are extremely athletic with great players like (J.J.) Ramey and (Matt) Cromer. If we can correct some things, I think we are right there.”

Ramey, the region’s top-rated player, finished with 19 points to lead the Cardinals, who played without Cromer for about half the game due to a head injury he suffered in the closing seconds of the opening quarter. Junior guard Brett Norvell also had a big game for South with 17 points.

Pace and Smith opened the game with 3-pointers to give the Bears an early 6-0 lead. South spent the rest of the period battling from behind, closing with a 7-0 run to tie the game at 10-10 on a Ramey layup to beat the buzzer.

Harlan County started strong again in the second quarter with another 6-0 run, this time on baskets by Spurlock, Pace and Smith. South answered with a 10-0 run, capped by Ramey’s dunk, for a 20-16 lead. Baskets by Spurlock and Elisha Smallwood cut the deficit to two, at 22-20, going into the halftime break.

“We made some silly mistakes defensively and silly turnovers offensively. We talked at halftime about giving up nine points over silly stuff, but we still played well enough defensively to win the game,” Jones said. “We just didn’t have shots fall tonight like we’re capable of making.”

A 3-pointer by Micah Anders and baskets from Norvell, Alex Hostetler and Ramey pushed the Cards’ lead to 10 late in the third quarter before HCHS rallied behind Josh Turner and Spurlock to cut the deficit to 35-31 going into the final period.

Smith’s 3-pointer midway through the fourth quarter pulled the Bears within three. HCHS got as close as four twice in the final minute but couldn’t get a stop. A three-point play by Norvell with 11.9 seconds left put the game away.

The two teams will meet again on Saturday at South Laurel in the Raymond Reed Classic.