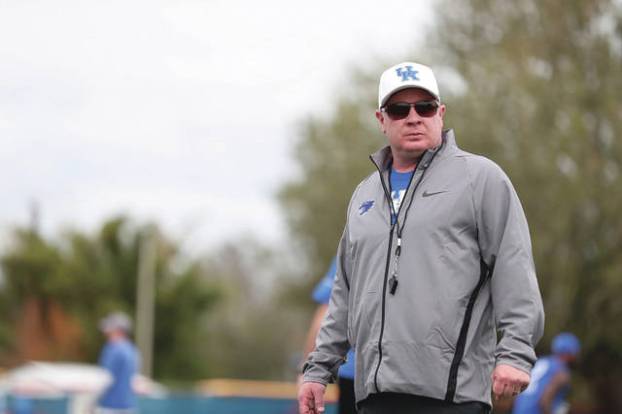 LEXINGTON (KT) — Kentucky will be in the spotlight on New Year’s Day and the extra attention will be motivation for the Wildcats when they take on Penn State in the Citrus Bowl.

“I think as you move up and play in New Year’s Day bowl game, and play Penn State, it’s definitely motivation,” Kentucky football coach Mark Stoops said. “We have a lot of respect for Penn State and their history. It’s also about us and playing this game and guys that want to play and want to win. Again, we gave it a great effort a year ago and came up a play short and our players are motivated to go try to get the victory.”

The last time the Wildcats played on New Year’s Day, Kentucky dropped a 26-14 loss to the Nittany Lions in the Outback Bowl at Raymond James Stadium in Tampa. Since then the Wildcats have made five appearances in the Music City Bowl.

The Wildcats (9-3) will be making their third straight postseason appearance under Stoops, a streak that began three years ago with a 33-18 setback to Georgia Tech in the TaxSlayer Bowl. Last year the Wildcats dropped a disappointing 24-23 loss to Northwestern in the Music City Bowl.

Stoops said the past two defeats have been a letdown and would like to see the Wildcats end a four-game postseason losing streak. Rich Brooks guided Kentucky to three-straight bowl victories before ending his tenure with a 21-13 setback to Clemson in the Music City Bowl in 2009.

“I know it’s bothered me when you’re in those bowl games and you put that amount of work in and you exit that field and one team is up there accepting a trophy and the other team is going in the locker room and I can promise you there are no runner-up trophies going in our trophy case,” Stoops said. “They gave us one a year ago and I think its permanent place is in the bottom drawer and it will stay there so we need to go win one.”

Stoops would like to see his senior class, anchored by Josh Allen and junior running back Benny Snell go out with a win to end their careers and reach the double-digit plateau for the first time since 1977.

“They invest a lot and work extremely hard and they have for a long time to do some of the things they’ve done,” Stoops said. “To win 10 is significant and our players know that and I don’t have to address that every day. They understand that and what’s at stake — playing New Year’s Day, playing Penn State, winning 10, you put it all together and it’s important.”

The Wildcats practiced at West Orange High School, followed by a visit to Universal Studios Theme Park on Thursday. Kentucky arrived in Orlando in preparation for the contest on Wednesday night.

Kentucky’s success this season produce a successful crop of recruits. Kentucky signed 21 players during the early signing period last week. The Wildcats were ranked in the upper echelon by most recruiting agencies, including Rivals, which had the Wildcats at No. 28 in the nation.

“The message now is let’s go beat Georgia,” Kentucky recruiting coordinator Vince Marrow said. “We’re climbing up the hill and beating some of these other teams, but we got to get Georgia. We’ve got to get the SEC East soon.”

Kentucky went 5-3 in the SEC this season and finished tied for second in the SEC East with Florida. The lone league setbacks were to Tennessee, Georgia and Texas A&M.

Harlan had no trouble shooting a lot of 3-pointers in just about every game this season. The Dragons have started... read more