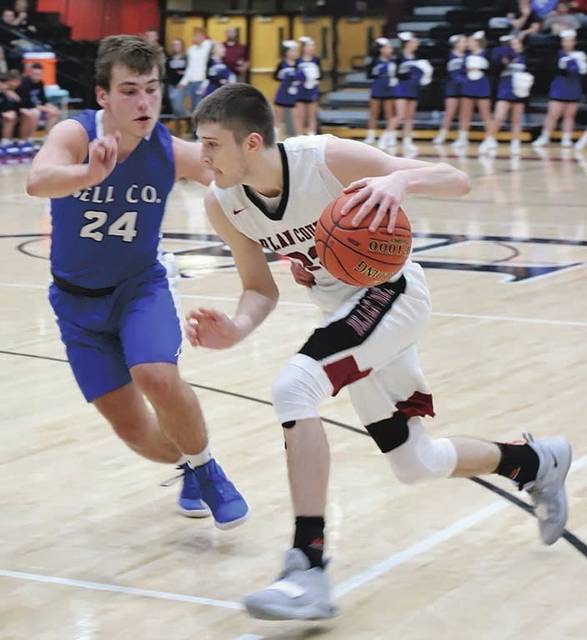 Ranked among the 13th Region’s best players coming into the season, Harlan County senior guard Alex Pace hadn’t been quite himself through the Black Bears’ first four games.

He picked a good time to break out of a mini-slump as far as the Bears are concerned as he scored 30 on Tuesday to help Harlan County edge visiting Bell County 73-67. Taylor Spurlock and Gabe Price added 16 and 15 points, respectively, as the Bears broke a two-game losing streak and improved to 3-2 overall.

“Alex shot the ball extremely well tonight, and knew that was coming,” Harlan County coach Michael Jones said. “I told the kids I knew we would start hitting shots, because I know how well we can shoot it. We just have to defend and block out better.”

Both coaches found plenty to like about their effort on Tuesday and plenty of areas that needed work. They also both agreed that the 52nd District this year may be as balanced as it has been in a long time.

“It’s pretty balanced. I think it’s going to come down to who is playing the best at the end of the year,” Bell County coach Frankie Smith said. “I still don’t think we’re playing that good right now. We’re 1-4 right now, but that doesn’t alarm me because our attitude is good right now and we’ve lost to some good teams.”

“It was a good atmosphere for our kids and both teams played hard,” Jones said. “We have some things we have to correct, and I know Bell has things they want to correct. I said before the year it’s the best district in the region, and we’re lucky to come out with a win.”

“We weren’t being strong with the ball and making silly passes,” Jones said. “We’re taught to put the ball out in front of us, but we didn’t do that very well tonight. We got the double-digit lead and then only scored four points in the third quarter because we didn’t protect the ball and didn’t do the things defensively that got us the lead.”

“I thought our energy was good and the press gave them some issues,” Smith said. “We had to get out of it in the second quarter when they started hitting some shots. We were back at full strength in the second half, and our press was much better.”

Bell’s press caused problems for the Bears early as the Bobcats built a 12-5 lead. Harlan County reeled off eight straight points on baskets by Elisha Smallwood, Pace and Spurlock to go up by one. After several lead changes, Bell freshman Dawson Woolum hit a 40-footer at the buzzer to put the Bobcats up 20-19.

Harlan County took control in the second quarter as Pace hit three 3-pointers while Bell connected on only two of 12 shots. A long 3-pointer by Price to close the half extended the Bears’ lead to 39-28.

HCHS led by 13 midway through the third quarter when Bell went on a 14-0 run to go up by one, at 44-43, after three periods. Brock led the Bobcats, hitting four of five shots in the period.

“We didn’t quit. We played with some passion tonight, but we have to find someone else to score besides Sawyer and London,” Smith said.

Harlan County went back up by five midway through the fourth quarter before Bell rallied again, tying the game at 61-61 on a basket by Partin with 21 seconds to play. Both teams missed opportunities in the closing seconds of regulation.

A big basket by James Smith put the Bears up by three in overtime as HCHS went on a 12-2 run to take control. Spurlock, Pace and Price each hit two free throws to put the game away.

No one in the 13th Region lost more talent since last season than the Harlan County Lady Bears, but Bell... read more