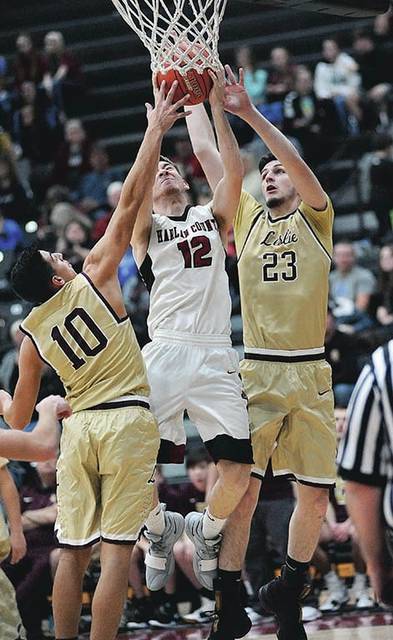 Harlan County senior guard Gabe Price pulled down one of his team-high 12 rebounds on Monday in the Black Bears’ 69-48 victory over visiting Leslie County.

Two games into the 2018-2019 season, the Harlan County Black Bears have started a defensive trend that could lead to a lot of success by holding both Breathitt County and Leslie County to 13 points in the first half.

“We’re being active on defense, getting out in the passing lane and switching on screens like we’re supposed to and blocking out,” Harlan County coach Michael Jones said. “We’ve gotten out of that in the second half, which is something we have to do a better job of starting tomorrow night (against Perry Central in the WYMT Mountain Classic).”

“Mike has always done a great job defensively,” Leslie County coach Tim Rice said. “We knew they would get up in us and we’d have a hard time getting in our offense. They have a really good team.”

Guards Taylor Spurlock and Tyler Cole led the 2-0 Bears by combining for 28 points and 14 rebounds as they hurt Leslie with multiple putback baskets.

‘They both played real well,” Jones said. “Taylor shot the ball well and Cole did an excellent job going to the boards. We talk about sharing the ball offensively, so you have to go to the boards and get some shots that way, and that’s what Cole did.”

“They hurt us on the boards. They probably had at least 20 offensive rebounds,” Rice said. “They just shot until they made it. We have to get in the gym and work on blocking out.”

The Eagles were led by sophomore guards Trent Day and Alex Farler with 17 and 11 points, respectively.

The Bears pitched a shutout for all but 30 seconds in the first quarter, racing to a 15-0 lead before Day broke the drought with a 3-pointer. Smallwood had three baskets off the bench for the Bears, who built a 17-3 lead

Spurlock led the HCHS offense in the second quarter with a pair of 3-pointers. Smallwood provided an inside complement with a pair of baskets as the lead grew to 33-13 by halftime.

Spurlock and Cole teamed for five baskets in the third quarter as the Bears’ lead grew to 51-27 going into the final period.

The HCHS reserves played the entire fourth quarter and extended the lead to as many as 28 points. Jackson Huff, James Gray and Brayden Cox had baskets for the Bears, with Gray pulling down five rebounds and Jayden Ward adding three.

The Eagles, who defeated Pike Central on Saturday, fell to 1-2 with the loss. Rice has had to replace all five starters in his first year as head coach.

“We’re trying to win and learn,” Rice said. “We play 10 games before Christmas, so we won’t to see where we are then. At times tonight, we had three sophomores, a freshman and eighth grader on the floor. We’re going through some growing pains and have to get better offensively and defensively.”

Harlan County will play Perry Central on Tuesday at 7:45 p.m. in the first round of the WYMT Mountain Classic at Perry Central.

Jayden Ward tossed in 10 for the 2-2 Bears. James Gray and Brayden Cox chipped in with four each. Adam Boggs scored two. Caleb Reynolds added one.

Cats shows plenty of fight to down UNCG

LEXINGTON (KT) — Kentucky was in the fight of its life until the final 13 minutes. That’s all the time... read more