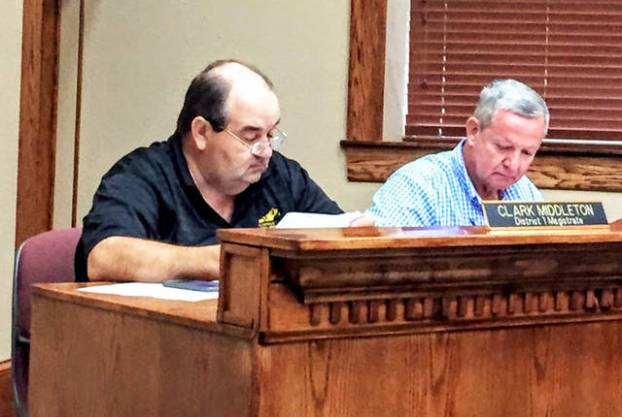 The Harlan Fiscal Court heard an update on several park projects ongoing in the county during a recent meeting, including a proposal for new playground equipment for a park near Green Hills Elementary School.

“We had to close out some coal severance projects,” Harlan County Judge-Executive Dan Mosley said. “The last couple years, we’ve really tried to focus on improving our parks. We focused on how, from a tourism perspective, we were able to save the Portal 31 and the Benham Inn. Also, from a parks perspective, we relocated the Cawood Park from a terrible location and put it right next to the school.”

According to Mosley, many children now use the park located near the Cawood Elementary School.

“I was up there the other night, and there were kids playing everywhere,” Mosley said.

“As part of his project money, Magistrate James Howard wanted to put that together with the help of that community,” Mosley said. “That really was a community driven project where they raised money to pay for things that we didn’t for that particular park.”

Mosley said the magistrates had asked for recommendations for similar projects in their districts.

“I’ve got some recommendations I would like to make today,” Mosley said. “One is the playground equipment near the Green Hills Elementary School.”

Mosley explained the playground equipment at the Bledsoe Community Park, which is adjacent to the school, is in need of repair.

“(Magistrate) Clark Middleton and I have been over there,” Mosley said. “We’ve actually been talking about it for the last couple of years and just was never able to move forward with replacing that equipment.”

“We have received a quote on that proposal from Bluegrass Recreation Sales and Installation,” Mosley said. “It’s $19,998.27. The rock climbing wall is included in that. It’s a really a nice design and setup that would be a nice addition to that park.”

Mosley recommended the court approve the proposal for the new merry-go-round and rock climbing wall.

The magistrates passed a motion approving the purchase and installation of the new equipment. The motion passed with no opposition.