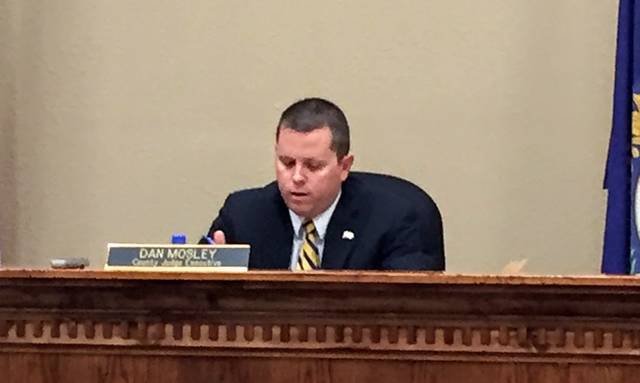 Harlan County Judge-Executive announced an upcoming job fair during a meeting on Tuesday.

The Harlan Fiscal-Court announced an upcoming job fair — slated for May 24 — during a meeting on Tuesday.

Harlan County Judge-Executive Dan Mosley brought the court up to speed on the event.

“The Harlan County Economic Development Authority is partnering with the Eastern Kentucky Concentrated Employment Program to sponsor a job fair on Thursday, May 24 at the Harlan Center,” Mosley said. “(Harlan County Economic Development Director Larry Calhoun) and I have met with several companies over the last couple of weeks that have immediate job openings, 100 of which are at SEKRI in Blair.”

According to Mosley, approximately 12 Harlan County-based companies will take part in the job fair.

“We’re going to put all those employers under one roof to showcase the opportunities that are available,” Mosley said.

Mosley said in addition to SEKRI, the Harlan County Board of Education, Harlan ARH Hospital and Addiction Recovery Care will be taking part.

“They’re going to provide 100 jobs on an immediate basis, just as soon as they can hire,” Calhoun said. “They will provide benefits as well as an hourly wage. That will be at their Harlan County Facility, we’re excited about that.”

Calhoun pointed out the local economy is getting better.

“The economy is picking up,” Calhoun said. “Companies are starting to employ, so we’re thinking there’s a bright future ahead.”