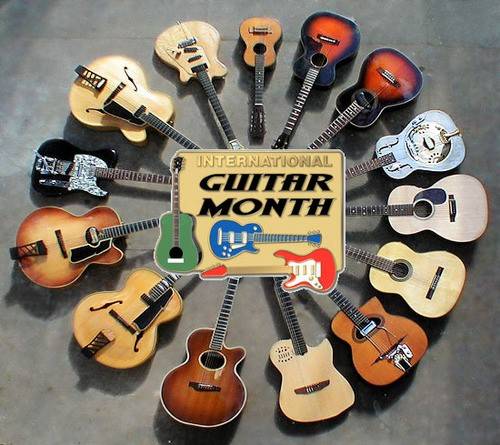 April is International Guitar Month, a celebration of one of the most popular musical instruments in history.

According to www.discoverguitar.com, International Guitar Month (IGM) was created in 1987 as an annual celebration of guitars and guitar products.

The Encyclopedia Britannica website at www.britannica.com states the guitar probably originated in Spain early in the 16th century. The early version of the instrument was narrower and deeper than the modern guitar. It was a close relative of the vihuela, a guitar-type instrument played in Spain in place of the lute.

The guitar appeared closer to the instrument we know today by the 19th century.

Encyclopedia Britannica explains in the 19th century the guitar underwent changes in the 19th century. The instrument became broader and shallower, with an extremely thin soundboard. Internally, the transverse bars reinforcing the soundboard were replaced by radial bars that fanned out below the sound hole. The neck was formed into a brace that projected a short distance inside the body and was glued to the back, giving the instrument increased stability against the pull of the strings. The 19th-century innovations were largely the work of Antonio Torres. The instrument that resulted was the classical guitar.

The guitar achieved great popularity by the 20th century, and once electrified, was a major factor in the popularization of multiple musical genres, including rock and roll, blues and country.

According to “A Brief History of the Guitar” by Paul Guy, which can be found at www.guyguitars.com, the electric guitar came about in the late 1920s when pickups were added to Hawaiian and “jazz” guitars, but met with little success. That changed in 1936, when Gibson introduced the ES150, made famous by Charlie Christian. Following the invention of amplification, it became possible to do away with the soundbox altogether. In the late 1930s and early 1940s several individuals were experimenting along these lines, and the debate still continues as to whether it was Les Paul, Leo Fender, Paul Bigsby or O.W. Appleton who fashioned the first solid-body electric guitar. Either way, the solid-body electric guitar wasn’t going away.

Whether you’re an expert player, a novice or simply a fan of guitar music, feel free to take some time to enjoy a little extra guitar during the month of April.

Heavy winds cause damage across county