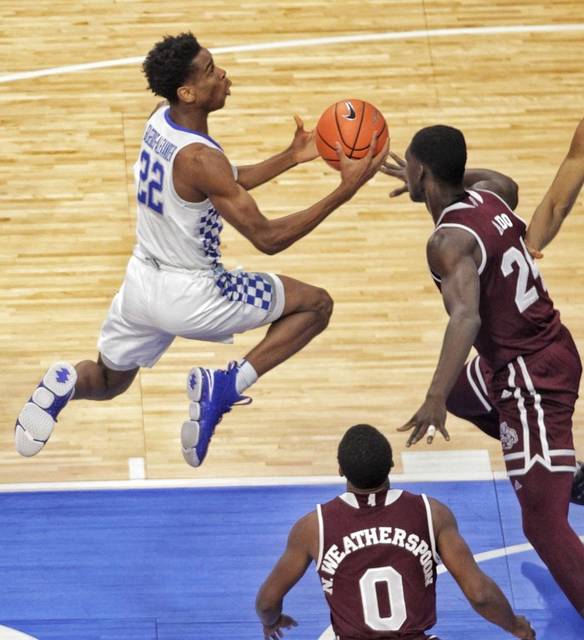 Kentucky guard Shai Gilgeous-Alexander has led the Wildcats in scoring four times this season and poured in 30 in an 83-81 win over Vanderbilt earlier this week.

LEXINGTON, Ky. (KT) — Kevin Knox has proven he can take the lead when it comes to scoring. Shai Gilgeous-Alexander also can take over the reins on offense when called upon.

The two Kentucky freshmen have led the No. 21 Wildcats in scoring during the past two games, a sign the Wildcats (17-5, 6-3 Southeastern Conference) aren’t a one-dimensional team. Knox scored a career-high 34 points in an 83-76 win over West Virginia last weekend, while Gilgeous-Alexander tallied 30, also a career high to pace Kentucky in an 83-81 overtime victory over Vanderbilt earlier this week.

Although it was Gilgeous-Alexander who carried the scoring load, Quade Green provided the heroics with a driving layup with four seconds remaining to hold off the gritty Commodores.

“There’s always going to be somebody else that steps up big in the end,” Knox said. “Last game it was my game. (Tuesday night) it was Shai. That’s what kind of makes us dangerous, because we got so many weapons that can really score the basketball and really can put the ball in the basket.”

Green was elated by his game-winning shot but said Gilgeous-Alexander was the spark behind the comeback.

“He made some crucial buckets that really helped us,” Green said. “He’s hard to guard. He has a seven-foot wingspan … it’s very hard to guard him.”

Knox, the team’s leading scorer with 15.6 points per game, has led the Wildcats in scoring seven times, while Gilgeous-Alexander has been the top scorer in four contests. Gilgeous-Alexander scored 52 points in the two victories over the Commodores. He had 22 in a 74-67 win on Jan. 13 in Nashville.

Gilgeous-Alexander couldn’t pinpoint a reason behind his two performances over Vandy, but Commodores coach Bryce Drew said the freshman guard is tough to defend, giving him an edge over his team’s much-smaller backcourt.

“He has great size and he is shifty,” he said. “You know, he uses his change of speed really, really well. And, he has a size that can fish over the top of smaller guards or get shots up over bigs and so he has had two excellent games against us and you know you’ve got to credit him for being a shot maker, especially in that second half (Tuesday).”

Kentucky assistant coach Kenny Payne praised the performance of both players in the thrilling win over Vanderbilt earlier this week. Despite a slow start following his career performance against the Mountaineers, Knox finished with 18 points and eight rebounds in his last outing.

“For that kid (Gilgeous-Alexander) to come out the way he did for us to win says a lot about him. That was adversity throughout the game for him, he kept fighting,” Payne said. “Same with Kevin (Knox). The way Kevin finished this game, opposed to the way he started it? Big. Big for him. Because that was pressure on him, as an example, a kid comes off a game where he has 34 points, he’s second-guessing, am I expected to do this every night? Well, as you see, the answer is yes and sometimes it doesn’t go that way.”

Gilgeous-Alexander admitted it wasn’t easy getting over the emotional win over West Virginia.

“I wouldn’t say it was hard, I think it was just us being complacent, myself a little bit included as well,” he said. “We have to stop doing that. We get a little bit too high after good wins and stuff like that and we have to stay level-headed.”

In addition to scoring, Knox and Gilgeous-Alexander have provided a boost for Kentucky on the defensive end of the floor.

“Defensively, you don’t know what guy is going to have a good night,” Knox said. “(Tuesday) it was Shai and last game it was mine. Once we come to March and once we can get playing 40 minutes just hard and fight and defensively and everyone playing the way we should play, we’re going to be hard to stop. We just gotta be able to get everybody on (the same) page.”

Who should Wildcats add to schedule?

One of the best aspects of being a sports fan of a particular team is having that certain team to... read more