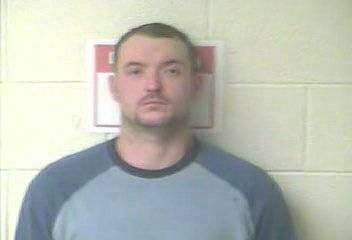 A man has been indicted for complicity to trafficking a controlled substance after allegedly aiding in the sale of a hydrocodone in 2009.

Jamie B. Engle, 38, Grays Knob, was arrested on an indictment warrant on Jan. 24.

According to the two-count indictment handed down by the grand jury on Feb. 23, 2009, Engle aided or counseled another in selling or transferring hydrocodone on or about Feb. 6, 2009.

According to the citation issued at the time of Engle’s arrest, Engle was a passenger in a vehicle involved in a drug transaction observed by KSP Trooper James Earl Hensley.

Engle was indicted second- and third- degree complicity to trafficking a controlled substance.

Hensley presented evidence to the grand jury resulting in the indictment.

In other police activity, Mary Callahan, 36, of Cumberland, was arrested on Monday by Loyall City Police Officer Mitch Alford.

According to the citation, Callahan was driving on a permit with no valid licensed driver. She could not show proof of insurance, and her registration had been cancelled for failure to maintain insurance.

Callahan was additionally served with an arrest warrant for theft by unlawful taking.

According to the arrest warrant obtained by Kentucky State Police Trooper Andy Soltess, Callahan took a wallet containing $1,900 in cash from a man’s home.

Callahan was charged with theft by unlawful taking under $10,000, instructional permit violations, no registration receipt, no registration plates, failure of non-owner/operator to maintain required insurance and failure to produce insurance card.

Callahan was lodged in the Harlan County Detention Center on a $5,000 bond secure by 10 percent.