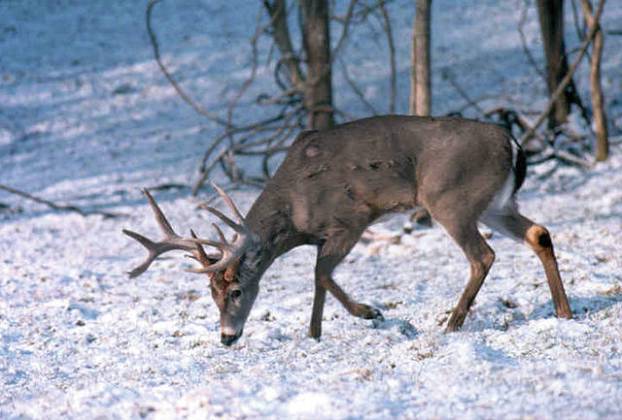 FRANKFORT — Looking at the total number of deer harvested by hunters in Kentucky during the 2017-18 season, it would appear nothing was out of the ordinary.

The season ended earlier this month. When it did, hunters had combined to take more than 136,000 deer across the state, making it the sixth consecutive season with a harvest total greater than 130,000 and the fifth highest total on record in Kentucky.

The figure could have climbed higher but for a significant outbreak of epizootic hemorrhagic disease (EHD) that hit deer populations in parts of east Kentucky particularly hard followed by a historic cold snap late in the season that likely deterred some hunters.

“I expected the harvest to be down a good bit, so I’m pleasantly surprised,” said Gabe Jenkins, deer program coordinator with the Kentucky Department of Fish and Wildlife Resources. “It’s the fifth highest harvest on record. The central and western parts of the state pretty much carried our harvest.”

Indeed, harvest totals were up in the Bluegrass, Green River and Purchase regions compared to the 2016-17 season. Hunters in the Bluegrass Region reported taking more than 42,500 deer, but it was a county in the Purchase Region that led the state.

“Some of our western Kentucky counties are producing a lot of deer,” Jenkins said. “Some of those are Zone 3 counties. One that stuck out in my mind was Breckinridge County. When the modern gun season ended in Zones 3 and 4 counties (in November), it was leading the way. Other counties caught up but it still yielded the sixth most deer of any county in the state.”

The modern gun season annually accounts for about 70 percent of the overall harvest total, and this year was no different. The 98,199 deer taken by modern gun hunters was 7 percent higher than the 10-year average and fifth highest on record.

Also noteworthy: bow hunters set another record in September, taking 2,026 deer during the opening three days of the season. In an effort to increase harvest in areas with an overabundance of deer, a regulation change opened the December muzzleloader deer season on 17 wildlife management areas, many in the Bluegrass Region. Hunters responded by combining to take 92 deer with a muzzleloader on those areas. State parks also hosted several new quota or open deer hunts this past season and those yielded 70 deer for hunters.

Although the season is over, analysis of the EHD outbreak continues.

The viral disease is transmitted to deer by biting flies or midges, which die with the first frost. Kentucky Fish and Wildlife receives and confirms EHD deer mortalities each year, but the 2017 outbreak was severe by comparison. The brunt of the outbreak was felt in the Northeast and Southeast regions, where harvest totals fell more than 30 percent and roughly 20 percent respectively.

Biologists know that in years with severe EHD outbreaks many hunters choose either not to hunt or hunt elsewhere. A drop-off in hunter participation – identified by a decrease in deer permits sold in EHD-affected counties – likely factored into the drop in harvest. Hunters also may be more selective with the deer they attempt to harvest in EHD-affected areas.

Wildlife biologists like Jenkins monitored the outbreak closely and are examining harvest and disease impact data before making their 2018-19 deer season recommendations to the Kentucky Fish and Wildlife Commission. Typically, those recommendations are presented to the Commission in December. Biologists decided to wait until March in order to analyze all the information available and run their computer models.

“Given the severity of the outbreak in eastern Kentucky, additional time for data collection and analysis enables us to make better management decisions,” said Steve Beam, Wildlife Division director for Kentucky Fish and Wildlife. “We want to make the right decisions based on all of the data that we have.”

One positive: deer populations in most eastern Kentucky counties were at the highest levels ever documented before the EHD outbreak. Such outbreaks can cause significant regional die-offs, but populations will recover with time. Another reason for optimism: deer that became infected and survived will carry immunity.

“One thing that we saw in our later seasons as we collected blood samples at deer processors and taxidermists and at our quota hunts in counties that experienced a severe outbreak, nearly every deer we put our hands on had been exposed, which is good,” Jenkins said. “If we would’ve gone down to Floyd County or Pike County at Fishtrap WMA and every deer that was harvested didn’t have any exposure that would suggest that every deer that had been exposed to EHD had died, which is not good. But that wasn’t the case.

“We have some herd immunity that’s going to be in the herd a while. Meaning there were deer that were exposed and survived. That immunity is going to continue through their lifetime.”

“Those reports were extremely valuable to us in trying to determine the severity of the outbreak and estimate the number of deer affected,” Beam said. “We want to thank the public for its response.”

CALL FOR ENTRIES: Hunters who took a trophy deer this past season have until May 1 to submit the necessary information for recognition in the trophy deer list that appears in the annual Kentucky Hunting and Trapping Guide.

To be eligible, a hunter must have taken a white-tailed deer in Kentucky this past season that net scored 160 or higher typical or net scored 185 or higher non-typical based on the Boone and Crockett scoring system. The completed and signed score sheet, along with a photo, should be sent to Kentucky Hunting and Trapping Guide, #1 Sportsman’s Lane, Frankfort, KY 40601. Include the county in which the deer was taken and the equipment used to harvest the deer. The information can also be submitted electronically by emailing info.center@ky.gov.

Author Kevin Kelly is a staff writer for Kentucky Afield magazine, the official publication of the Kentucky Department of Fish and Wildlife Resources. Get the latest from Kevin and the entire Kentucky Afield staff by following them on Twitter: @kyafield.

Yes, on a chilly winter day it can feel really good to curl up with a good book or binge... read more