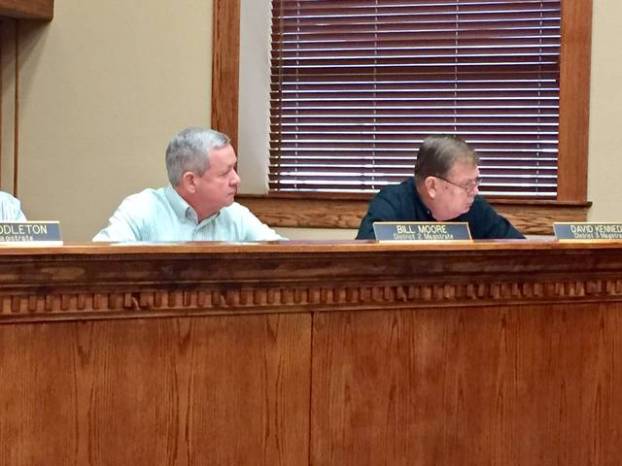 Magistrates Bill Moore and David Kennedy hear a bid for equipment and installation for a proposed skate park during a meeting on Tuesday.

The Harlan Fiscal Court opened the bids for skate park equipment for a proposed skate park near Dressen during a meeting on Tuesday.

“This is for the skate park that will be constructed at the park in Dressen,” Mosley said. “The court received a land and water conservation fund grant for it. Also, the Rotary Club received a very generous donation from a local business person who has advocated for a skate park to be constructed for years. We’ve got some coal severance money as well that’s allocated for this project.”

Hoskins told the court only one bid was received. The bid was from American Ramp for $96,919.80 and included an alternate bid omitting installation for $92,881.48.

Mosley said he would recommend having the company install the equipment.

“Once the site work is done and the pads are there, they would come in and put everything together,” Mosley explained. “It would be my recommendation that we accept the bid including installation.”

The court also discussed a bid for surplus steel I-beams.

“These are surplus beams that the court was given by the state on a bride project done on KY 72,” Mosley explained. “There are more beams than we can feasibly utilize.”

Hoskins informed the court one bid had been received.

The bid also stated the buyer could choose which beams he purchased.

“That would be giving them away,” Magistrate David Kennedy pointed out. “Two years down the road, we might need them.”

Kennedy suggested it may be better to sell the beams as scrap.

“I would think the scrap value would be higher,” Mosley said. “I thought we’d have several bids.”

“I was thinking the cities (Harlan, Cumberland, etc.) may need those,” Kennedy said. “I’d rather ask them if they wanted that stuff and let them have them.”

After further discussion, the court passed a motion to table the bid in order to negotiate for a better price.