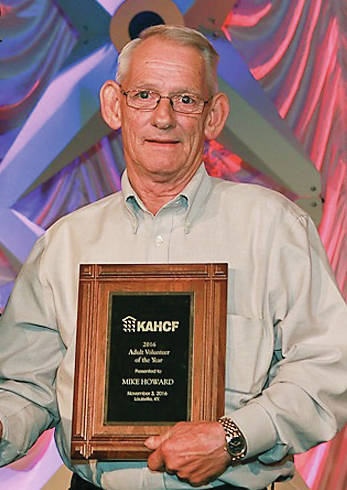 Mike Howard was named the Adult Volunteer of the Year by the American Health Care Association (AHCA) and a Volunteer of the Year for Kentucky Association of Health Care Facilities (KAHCF). Howard, known throughout the area as “The Mountain Santa,” was also selected to receive the Lifetime Achievement Award by the Harlan County Chamber of Commerce.

Mountain Santa will be missed

Harlan County has lost one of its most respected residents, the man known all over as “The Mountain Santa.” Mike Howard passed away on Saturday after a battle with cancer.

Howard’s son-in-law Willie Galloway, who provided a statement from the family, said Howard spent over 40 years as a dedicated volunteer and a genuine ambassador to the citizens of Harlan County.

“We know how much everyone loved Mike and how much he will be missed by all the lives he touched,” Barbara Howard, Mike Howard’s wife of 41 years, said via the family’s statement. “Our family loves all of you just as much as Mike loved you.”

She pointed out his dedication was something to behold.

“Even when he was sick he would still go out and make sure everyone had something for Christmas who was in need,” Barbara Howard said. “The frigid temperatures and obstacles could not stop Mike.”

Galloway said Mike Howard was known to always have a smile on his face for anyone he met, and he never met a stranger. He would always have something good to say about the Lord and how the Lord always made a way for him to continue his ministry for over 40 years.

“Our family is heartbroken that Mike is gone and we will miss him more than words can ever express,” Barbara Howard said. “I please ask for no interviews at this time or TV cameras at the services. This is the time for his family and friends to mourn his departure from this life. We will now have to await our time to join him in Heaven.”

Mike Howard’s efforts have been greatly appreciated by the community over the years. In 2015, He was drawn to what he thought was just a birthday party, but when he arrived he discovered a surprise party for him in honor of 40 years of the Mountain Santa.

“They really pulled one off on me,” Mike Howard said in an interview shortly after the surprise party. “I thought it was for my birthday. When I walked in, it was for 40 years. They tricked me on that one.”

He was quick to mention he relied on many other people to help get the work of the Mountain Santa done.

“If it wasn’t for the people of Harlan County, and other places, there’s no way that I could do what I do,” he said. “The Lord has sure blessed me with help.”

He will be laid to rest on Wednesday.

“Mike was a devoted Christian who provided Christmas for needy children, ministry to jail inmates and the nursing homes,” Galloway said.

Visitation will be Tuesday from 5 p.m. to 9 p.m. at the Harlan Center.

Funeral services will be conducted at 1 p.m. on Wednesday at the Harlan Center.

The Howard family asks they are granted privacy from TV cameras and interviews during the visitation and funeral services.

An Evarts man is facing multiple charges, including burglary, after allegedly kicking in a door to a residence that had... read more