Cats happy for a shot at redemption 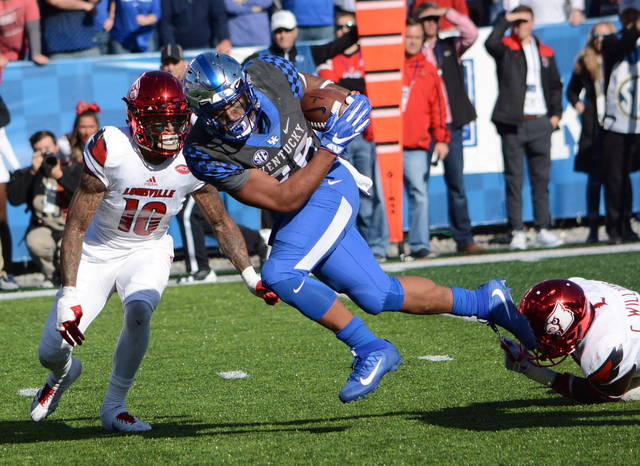 Kentucky running back Benny Snell and the Wildcats will take on Northwestern in the Music City Bowl on Dec. 29 in Nashville.

LEXINGTON (KT) — Kentucky is eager to get back on the field and redeem themselves following back-to-back blowout losses to end the regular season.

“I just think we’re hungry as a team,” Kentucky senior wide receiver Charles Walker said. “We’ve had the week off, we’ve had players coming in everyday watching film, doing workouts, getting their footwork right. I think the team is hungry.”

The Wildcats finished 7-5 for the second straight year and broke even in the Southeastern Conference at 4-4, but were outscored 86-30 in losses to Georgia and rival Louisville to close out the regular season. Kentucky quarterback Stephen Johnson, also a senior, said the 44-17 setback to Louisville still lingers.

That last game for Johnson and the senior class will be against Northwestern in the Music City Bowl set for 4:30 p.m. on Dec. 29 at Nissan Stadium. Johnson said the Wildcats want to finish the season strong and end a two-game losing streak.

“We just want to finish it off strong,” Johnson said. “College football is a business so you have to keep getting guys in. I’m excited for where this program is going to go. Just to see the new recruits they have, the freshmen, the sophomores and even the juniors that we’ve got coming back, I’m really excited to see what this team’s got for next year, too.”

In addition to erasing the pain of back-to-back double-digit setbacks, Kentucky also aims to produce a better showing than it did against the Cardinals, a contest that featured a brief melee in the second quarter and seven penalties for a loss of 86 yards.

“We lost our composure and I don’t think there’s any mystery in that,” Kentucky athletics director Mitch Barnhart said. “We got frustrated and we lost our composure and did not handle ourselves. We’re one of the fewest—over the last two or three years, we’re one of the fewer penalized teams in the league and, frankly, most of those penalties are generally holding or pass interferences or things like that. Things that are not like that. That is not who we’ve been. I think we’ll continue to manage most of those things internally. Mark did a good job of that. He addressed it and I think we can work our way through that, but that’s not who we are.”

Kentucky senior linebacker Courtney Love agreed and is looking forward to ending his collegiate career against Northwestern, a team he played against during his brief stay at Nebraska.

“I don’t think we need to put any unnecessary pressure on ourselves but we do need our fans to help uplift us and we need to uplift our fans. I think it’s going to work hand-in-hand. We definitely need to just go out and play our best football and be the best team we can be that day. During our preparation, do as much as we can to get on these guys and be really prepared and focused to play the game we know how to play.”

Barnhart added he’s not concerned with having the football and basketball teams playing on the same day at two different sites. The men’s basketball team hosts rival Louisville at 1 p.m., while the bowl encounter will kickoff three-and-a-half hours later in Nashville.

“I think these are challenges other programs have had to face and so certainly that’s something I hope we have to face on a regular basis,” Barnhart said. “That’s the challenge you want. You want to have two programs that are functioning at a high level, that have people that really want you to be on a television scene one way or another and it causes you to have to work at that. So yeah, we’ll work at it. Those are the kind of challenges that are really, really special for your program. I want us to have multiple opportunities to showcase the University of Kentucky. If we’re not doing that, then, my word, I don’t think we’re doing what they put us in this spot to do. So I would like to be able to have multiple opportunities to showcase Kentucky.”