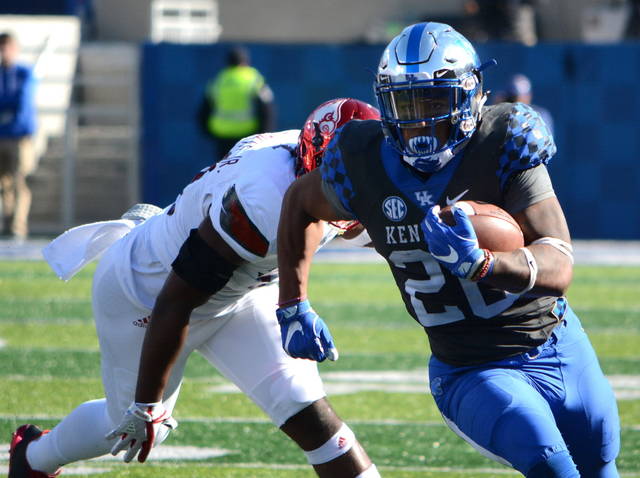 Kentucky running back Benny Snell rushed for 211 yards and two touchdowns in a 44-17 loss to Louisville on Saturday at Kroger Field.

LEXINGTON, Ky. (KT) — It was a bad day at the office for Mark Stoops.

Although sitting through Kentucky’s 44-17 loss to rival Louisville made his day one to forget, his troubles began late Friday night when senior Nick Hayes sent a message on Twitter criticizing the coaching staff on the eve before he and 24 other seniors were to be honored prior to Kentucky’s home finale against the Cardinals.

Long before kickoff, Stoops and Haynes settled their differences and the tweet was removed, but other issues surfaced as the two teams delved deeper into a rivalry game Louisville has now won for six of the past seven seasons.

“It was not a very good feeling from the opening possession through the end of the game,” Stoops said afterward. “Not a very good effort on any of our parts. I thought our team really, all year, had pretty disciplined focus and habits throughout the year, and I didn’t do a good enough job preparing ourselves for this game and this rivalry. We did not play very good, we did not coach very good, and we certainly did not play with the discipline and the character that this team has. That’s not acceptable. That’s not OK, and I was very disappointed in that, and that needs to be addressed and improved. So that’s probably the biggest disappointment.”

The contest got out of hand near the end of the first quarter when Kentucky’s Jordan Jones and Louisville quarterback Lamar Jackson got into a shoving match that escalated until it reached midfield. Jones never settled down, while Jackson showed why he remains one of the top quarterbacks in the nation.

“Jordan is an extremely emotional player, and there’s times when it gets the best of him and I need to do a better job of working with him and holding him accountable and holding his feet to the fire on that,” Stoops said. “He is definitely an emotional guy. He needs to control that better. I’ve got to coach it better.”

Kentucky senior Charles Walker, a Louisville native who knows all about the history between the two foes, wasn’t surprised by the exchange between Jackson and Jones.

“It’s going to happen in a rivalry game,” Walker said. “There’s 22 guys on the field that are competitors. When things go haywire, some people respond faster than others. I don’t think it threw us off, we just didn’t have our best game today, and to beat a good team like Louisville, you have to play your best.”

Louisville eventually regrouped, but it was a different story for Kentucky. The Wildcats gave up 30 unanswered points before Benny Snell crossed the goal line with a 4-yard touchdown run with 4:53 remaining for the final margin.

Although Snell gave the Kentucky offense a big lift, Wildcats failed to contain Jackson, the reigning Heisman Trophy winner, who accounted for 372 total yards. Jackson threw for 216 yards and ran for 156 more, against a Kentucky defense that had no answer for Jackson from start to finish.

“Lamar Jackson is one heck of a player,” said Kentucky senior Courtney Love, who tied a career high with 10 tackles. “He’s a resilient and tough player. We give those guys all the credit. We came out on the short end and it wasn’t something that we wanted to do, but they executed when we didn’t and that showed up a lot.”

Jackson’s final numbers were stellar, but Kentucky running back Snell did what he could to keep the Wildcat offense from falling apart on a day when starting quarterback Stephen Johnson threw for just 110 yards and was sacked three times. Snell rushed for 211 yards and two touchdowns, becoming the first Kentucky running back to run for more than 200 yards in 15 years.

Although his performance was a career high, Snell said the setback, Kentucky’s third in the past four games, was disappointing, considering the Wildcats had their previous three games when coming off a loss.

“It was a rivalry game,” Snell said. “Everybody wanted to win. It definitely mattered to a lot of us. It’s a hard pill to take, but it is what it is.”

Now that the regular season is over, Stoops and the Wildcats will get a much-needed break before playing in the postseason for the second straight season.

“What stinks is it’s the last game of the year. This sits with you for a while, and that’s the thing that’s very difficult about losing the last game of the year. Fortunately, we do have a bowl game and we could get back on track. The players definitely need to get away from here for a minute and decompress. It is a long year. … the players need a little bit of time to get away and decompress and heal up, and get away from football for a week or however many days, and then get back at it.”

“The season is not over,” he said. “Not the way some of the seniors wanted to go out, but you know, we didn’t bring our A-game and Louisville did. So, that’s what happens when one team doesn’t play to their capabilities. One game left, big bowl game. So we can finish the season with a win and that will be a successful season.”