Cats not satisfied going into finale 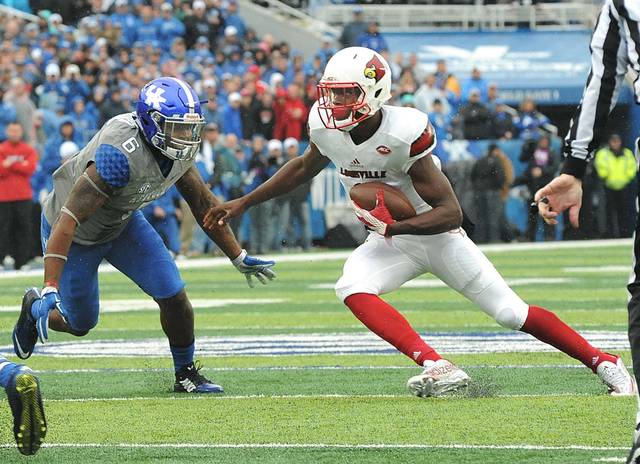 University of Louisville junior quarterback Lamar Jackson scampered for yardage two years ago in the Cardinals’ annual game with Kentucky. Saturday, the Heisman Trophy winner from a year ago will lead U of L against the Wildcats in a noon game to be featured on the SEC Network from Lexington. Both teams are 7-4, and revenge will likely be on Jackson’s mind as Kentucky upset Louisville 41-38 in 2016, winning on a field goal as time expired. The winning kick had been set up following Jackson’s fumble.

The Wildcats (7-4) will be looking for momentum going into the postseason and can finish off the regular season with eight victories for the first time since the 1984 team reached that feat, capped by a 20-19 triumph over Wisconsin in the Hall of Fame Bowl. That squad finished 9-3 in Jerry Claiborne’s third season with the Wildcats.

“We’ve still got a lot ahead of us,” Kentucky offensive coordinator Eddie Gran said earlier this week. “We’ve got a chance to win a couple of more games. That’s how we want to send (the seniors) out. We’re working hard to get that done.”

Like Kentucky, the Cardinals (7-4) are looking to finish the regular season strong after dropping three of four games prior to wins over Virginia (38-21) and Syracuse (56-10) during the past two weeks. Kentucky is coming off a 42-13 loss at No. 7 Georgia. Although the Cardinals haven’t performed to perfection, Kentucky coach Mark Stoops said Louisville remains a dangerous foe.

“They‘re good across the board,” the Kentucky coach said. “They’re good on offense and defense and special teams. They’re well coached. Of course, (quarterback) Lamar (Jackson) is a big part of it.”

A year ago, Kentucky broke a five-game losing streak to Louisville with an exciting 41-38 triumph at Papa John’s Cardinal Stadium and rattled Jackson in the pocket.

A Heisman Trophy winner a year ago, Jackson isn’t considered a front-runner to win the prestigious award for the second year in a row but has posted impressive numbers during his senior campaign. Jackson is Louisville leading rusher with 1,287 yards and has thrown for 3,273 yards. He has accounted for 40 touchdowns and threw for two and rushed for a pair in last week’s rout of Syracuse. Stoops said Jackson’s “normal progression” has been a big reason for his steady improvement.

“He was excellent a year ago, he’s excellent now,” Stoops said. “I think where you see the growth is just the poise maybe in the pocket and the time to distribute the ball.”

“He’s being more patient,” Gran said. “He’s really changed the last four weeks. That’s something that you learn. You can’t try to make some stuff up. You’ve just got to stay with the system and do what’s right. It matters to him. You can tell when he’s running the ball. You can tell after a game, before a game. I’m really proud of him.”

In addition to Snell, Kentucky signal-caller Stephen Johnson has been a steady force for the Kentucky offense, which racked up a season-high 44 yards in a win over Vanderbilt prior to last week’s loss to the Bulldogs.

“(You) just appreciate Stephen,” Stoops said. “You could go on and on. He’s definitely, as we’ve mentioned, he’s a leader and he’s a winner. He’s done a lot of good things and we appreciate him. … We’re fortunate to get the player we’ve gotten. He has probably exceeded expectations as far as some of those intangibles that you’re looking for. For a guy to come in and be a junior college transfer and have the type of leadership that somebody in here was just asking about, is definitely something special.”

Kentucky is 3-0 this season coming off a loss this season and Stoops expects the Wildcats top produce a positive performance against the Cardinals.

“We’ve never just shelved a game,” Stoops said. “We don’t do that. We’re going to be held accountable and everybody is going to look at this all together. The good and the ball. We’ll do that again today, but we will do it rather quickly and move on because we’re able to do that. Everybody can take their mistakes by the group. We’ll look at it, but we’ll move on pretty quickly and get onto Louisville. I don’t anticipate at all that there’ll be any kind of fog or hangover or anything with this team, just because that’s the way we’ve responded all year.”

Senior farewell: The Wildcats will honor 25 players before Saturday’s contest, set for noon at Kroger Field. Among the players who will play their last regular-season game for Kentucky include Johnson, Matt Elam, Courtney Love, Charles Walker and Garrett Johnson.

“They’ve been really a joy to coach, and as I’ve mentioned countless times in here throughout the preseason and throughout the year, that the leadership on this team is very strong,” Stoops said. “And it starts and ends with the seniors. Those guys have been very good and instrumental in some of the positive steps that we’ve taken. And hopefully, younger guys will learn from that, and continue to grow and push the program forward.”