LOUISA (AP) — Police say they have charged a man with killing two people in eastern Kentucky.

While investigating the deaths, police discovered evidence of previous interactions between the three and arrested Muncy. Police said more details about how and why the shooting occurred are not being released.

Muncy is being held at the Big Sandy Regional Detention Center, which did not have an attorney listed for him in online records.

GREENVILLE (AP) — A supervisor at a Kentucky coal mine has been sentenced for violating the Mine Safety and Health Act.

The Lexington Herald-Leader reports Daniel Couch Jr. was sentenced Friday to two years of supervised probation and fined $2,000 for falsifying a safety-inspection record.

Couch was chief of maintenance at the Ken American Resources Paradise No. 9 in Muhlenberg County. His job was to make a weekly inspection of electric equipment.

According to court records, a U.S. Mine Safety and Health Administration inspector checked a record book in 2016 and saw there had been no inspection of the belt drive at the underground mine during the week of May 1 through 7.

The inspector returned days later, and the book revealed Couch inspected the line on May 7 and saw no hazards.

The weather service says both tornados touched down Saturday and were rated EF-1.

The first happened shortly before 3:30 p.m. CST in Beaver Dam, Ohio County. The length of its path was 2 miles (3 kilometers) with peak winds estimated between 95 and 100 mph (150-160 kph). A person inside a shed suffered a minor head injury. Up to a dozen outbuildings were destroyed or heavily damaged.

Shortly after 4:30 p.m. EST another tornado near Guston in Meade County traveled nearly 2 miles with peak winds estimated between 100 and 105 mph (160-170 kph). A mobile home that had been anchored was destroyed after rolling several times. The homeowner inside crawled out afterward and suffered minor injuries.

LOUISVILLE, Ky. (AP) — Authorities say a police officer in Kentucky who’s accused of assaulting a man has been arrested.

Louisville Metro police spokesman Dwight Mitchell told news outlets that 30-year-old Christina Gaddis was an officer when she was arrested and served with the department for three years.

According to an arrest citation, Gaddis was in a shouting match with a man outside an apartment. She’s accused of pushing him into a set of stairs as he began to walk away. She’s also accused of striking the victim.

The man complained of pain in his jaw and nose when officers arrived. He also had dried blood on his face.

Gaddis was arrested Sunday and charged with fourth-degree assault. She has been placed on administrative leave. It’s unclear if Gaddis has a lawyer.

A statement from the Alzheimer’s Association says Kentucky is among the first states to offer such a specialty plate, which includes a “forget-me-not” flower on a purple background with the words “Honor. Remember. Care. End Alzheimer’s.”

Beginning this week, drivers can select the plate when renewing tags at any county clerk’s office and will also have the option of donating $10 to help fund Alzheimer’s awareness and education activities in Kentucky.

The Alzheimer’s Association says almost 70,000 Kentuckians have the disease and that number is growing.

FRANKFORT (AP) — The Kentucky State Parks system is gearing up for the Christmas season by offering candlelight tours, special meals and entertainment.

Officials say all resort parks will be open for lodging seven days a week this winter.

Many of those resort parks will also hold New Year’s Eve parties and dinners Dec. 31.

The Kentucky Enquirer reports 56-year-old Joseph Niemeyer pleaded guilty Monday to four counts of first-degree sexual abuse and one count of first-degree sodomy, all against a girl younger than 12 years old.

Kenton County Prosecutor Rob Sanders says he could spend up to 20 years in jail and must serve 17 years before being parole eligible. Sanders says he’ll appear in court again for a sentencing hearing.

Under the plea agreement, he’ll have to register as a sex offender for life.

HODGENVILLE (AP) — Authorities say a driver ran away from the scene of a crash that killed a woman in Kentucky.

Troopers were called shortly before 10 p.m. to help the LaRue County Sheriff’s Office investigate the two-vehicle wreck. Jensen’s 2010 Nissan Altima was struck by a 2013 Chevrolet Equinox that crossed into her lane for reasons unknown.

First responders from multiple agencies searched the area but were unable to find the Equinox’s driver.

Police are trying to identify a man who stopped responders on their way to the scene and provided information.

NASHVILLE, Tenn. (AP) — A Kentucky priest has been named bishop of the Diocese of Nashville.

The Nashville Diocese said in a statement on Tuesday that Pope Francis named Father J. Mark Spalding to the role. Spalding currently serves as pastor of Holy Trinity Parish and Holy Name Parish in Louisville.

The 52-year-old Spalding is a native of Fredericktown, Kentucky. He was ordained in 1991 and has served in a number of roles in the Archdiocese of Louisville, including vicar general.

The statement says Bishop-elect Spalding will be ordained and installed as the bishop of Nashville on Feb. 2 at the Catholic Pastoral Center. The diocese covers 38 counties in Middle Tennessee and includes about 76,000 registered Catholics. 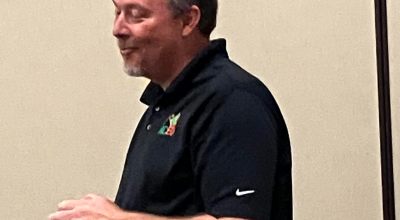