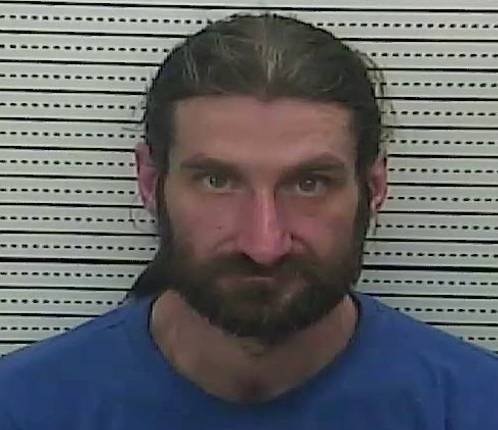 A Cumberland man is facing multiple charges including drug trafficking after allegedly being found in possession of the drug.

According to the citation, Layne and Officer Cody Bargo were on patrol on Nov. 13 on Railroad Street. Layne observed a vehicle in the roadway with a person standing in the road next to it talking to somebody in the vehicle. When he exited his patrol vehicle, the man threw something behind him. Layne identified himself as a police officer, and recognized Golden and the woman he was speaking with. Golden was told to remove his hands from his jacket pocket, and Layne conducted a search. Golden told Layne he had a “rig” on his person. Layne located a needle in Golden’s left front pocket and proceeded to search him for drugs. Layne located a set of scales, several small baggies and a clear, rock type substance inside a magnetic key holder. Bargo later located a small plastic baggie containing a clear rock-like substance behind where Golden was standing. The woman consented to a search of her vehicle. Golden told police the woman was not attempting to buy drugs, but was inquiring about a stolen computer. She was released from the scene after a search of her vehicle did not locate anything illegal.

According to the citation, Whitt was stopped on U.S. 119 for speeding. She told Burton she did not possess identification. During their conversation, Burton detected the odor of marijuana coming from the vehicle. While identifying her, Burton discovered Whitt had two active warrants. A search of the vehicle located suspected marijuana and methamphetamine.

Whitt was charged with first-degree trafficking a controlled substance (methamphetamine), trafficking in marijuana (less than 8 ounces), operating on a suspended or revoked operator’s license, possession of drug paraphernalia and speeding. She was lodged in the Harlan County Detention Center;

• Mark Broadus, 31, of Louisville, was arrested by Burton on Tuesday.

According to the citation, Broadus was the passenger in a vehicle involved in a traffic stop on U.S. 119. A search of the vehicle located suspected marijuana and methamphetamine.

Broadus was charged with first-degree trafficking a controlled substance (methamphetamine), trafficking in marijuana (less than 8 ounces), possession of marijuana and possession of drug paraphernalia. He was lodged in the Harlan County Detention Center;

• Jason L. Blevins, 33, of Pathfork, was arrested on Monday by Kentucky State Police Trooper Kenny Sergent. Blevins was charged with first-degree fleeing or evading police, speeding, operating on a suspended or revoked license, no operator’s license, reckless driving, no registration receipt, failure to produce insurance card and operating a motor vehicle under the influence of alcohol or drugs. He was lodged in the Harlan County Detention Center.

A third community meeting was held Friday, which focused on beginning a plan for the old Belk building in downtown... read more