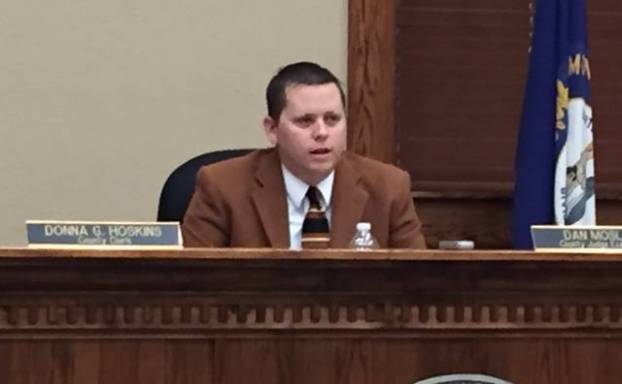 Harlan County Judge-Executive Dan Mosley relays the specifics of a bid for an emergency generator during a recent fiscal court meeting.

The Harlan Fiscal Court accepted a bid for a courthouse generator during a recent meeting.

Harlan County Judge-Executive Dan Mosley reminded the court a grant had been applied for to fund the generator.

“We had applied for a grant to get a generator for this building,” Mosley said. “The reason being this room we’re in is the emergency operations center when we have a disaster. It’s imperative there’s power in this building when there is a disaster.”

Mosley pointed out a generator is necessary in the event of power outages.

“We tried to get a generator years ago and was never able to secure a grant to get one,” Mosley said. “We were notified two weeks ago that we got the grant.”

Mosley said the generator would also power the sheriff’s office if needed.

“A lot of times police agencies have to look at relocating out of buildings if they aren’t powered during a disaster,” Mosley said. “This will make this building functional in case of a disaster.”

According to Mosley, the county had budgeted for a matching funds grant in the event the grant was awarded.

“It’s from Total Electric for 64,500 for generator installation,” Hoskins read.

Mosley said the bid came in under the county’s estimate.

“It would be installed in the brick building behind the courthouse,” Mosley said.

Mosley explained the building was originally designed to house a generator.

“All the conduits and vents are in place to accommodate something like that,” Mosley said. “The funds were just never secured to be able to do it.”

Mosley stated the bid specified the job includes installation for a Cummings 100KW single-phase generator. The generator must provide circuits to power lighting and HVAC for the courthouse.

The court voted to accept the bid. The motion passed with no opposition.

• The 2017 franchise bank share rates were reflected in the minutes;

• Geneva Jackson was appointed to serve the remainder of a term on the Harlan County Extension District Board vacated by Thelma Haley. The term expires Jan. 1, 2019.

A Grays Knob man is facing indictment after allegedly being found in possession of methamphetamine in May. Damon R. Philpot,... read more