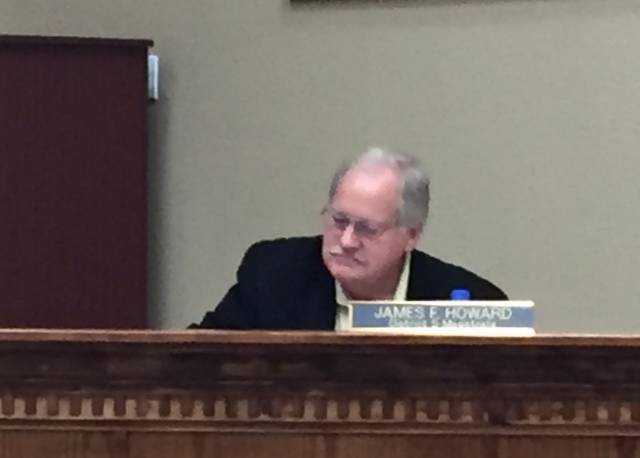 Magistrate James Howard examines a sample nuisance ordinance during a meeting on Wednesday.

During a meeting on Wednesday, the Harlan Fiscal Court discussed amending a nuisance ordinance to give Animal Control more power to enforce it.

“We’ve spoken to the magistrates about the nuisance ordinance, and how we might revamp the ordinance to give animal control more bite to enforce it,” Caldwell said.

Magistrate David Kennedy asked if the issue had been discussed with the Harlan County Attorney.

Caldwell stated he and Harlan County Attorney Fred Busroe had not yet had an opportunity to discuss how the ordinance should be amended.

“I think you need to sit down with the county attorney and discuss the changes you want made, then come back before the court for approval,” Kennedy said.

“I know there are some things in the ordinance that we need to look at,” Mosley said.

Busroe told the court there was a small issue with the sample ordinance the court was given.

“That’s not the actual ordinance,” Busroe said. “It’s real close, but I don’t know where that came from…I took a look at it and it’s not exactly the same.”

Busroe said the sample may have been an earlier draft of the ordinance which was approved.

Caldwell pointed out the sample was only intended as a starting point.

“That’s just a draft we put together for ideas on what needs to be added or deleted,” Caldwell explained.

Caldwell suggested shortening the time frame for taking action from a year to 30 or 60 days and allowing Animal Control to enforce the ordinance rather than requiring the sheriff’s office to get involved.

Magistrate James Howard pointed out every district has a problem dealing with issues such as chickens and other livestock running loose that could be dealt with via an amended or new ordinance.

Mosley mentioned a recent example of such an issue.

“You can’t go across Pine Mountain without running into 20 hogs out in the middle of the road,” Mosley said. “These are things that need to be explored…I think we all concur there need to be some revisions.”

After further discussion, the court asked Caldwell to consult with the county attorney’s office to come up with a course of action to address the issue.