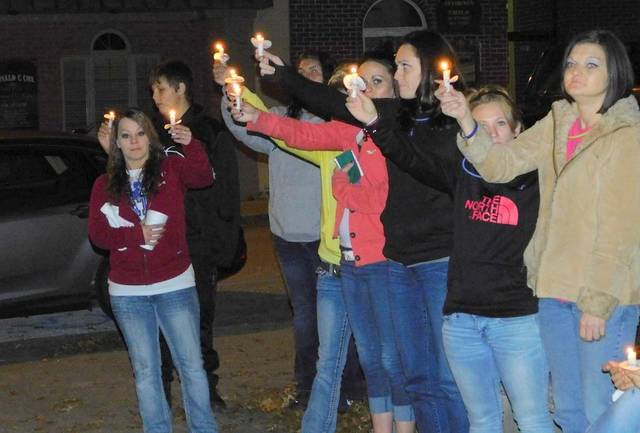 Megan Miniard (left), who spoke to the crowd concerning her own survivor’s story about a violent relationship of which she is now free, along with several participants of Lydia’s House of Faith Rehabilitation Center held up her candle in memory and honor of all victims.

The symbolism seemed to rise above the numerous candles that graced the Harlan County Courthouse lawn Thursday, as the statue of the “Unknown Soldier” seemed to be silently standing with everyone as they held up their candles in memory and in honor of domestic violence victims.

From the outside looking in, it was a somber moment as though the soldier seemed to actually be participating in the 11th Annual Domestic Violence Awareness Candle Light Vigil by holding up his arm along with the crowd.

Domestic violence victim advocate Sheryl Caudel, of the Harlan County Domestic Violence Council, led the opening remarks by noting that Kentucky lost 31 women last year due to domestic violence, also citing the state has one of the highest rates of domestic violence in the nation.

Caudel said domestic violence is not always just about women but affects men as well, noting the reason it is rarely heard of among men is because most men are ashamed to come forward.

“Domestic violence is not just a women’s issue, it’s a community issue,” said Caudel. “There is no reason to be ashamed to seek help no matter who you are.”

Caudel made mention of the late Harlan County District Court Judge Brock, noting he had been a great help in working with her office concerning domestic violence in the area. However, she also noted that Linsenbee has been just as much help since taking office last year.

Citing the statistics given earlier by Caudel, Linsenbee said, “Even one is too many to lose due to domestic violence.”

Hendrickson said there was a significant difference in this era compared to past decades in terms of people seeking help more openly.

“There was a time when this was in the shadows. It’s not in the shadows like it used to be,” said Hendrickson. “We take this very seriously.”

While the scheduled speaker was not able to attend the vigil, Miniard and Hubbard came forward to relay their survival stories, urging everyone to take a stand in getting help and to never continue in an abusive relationship.

Tears touched the cheeks of the crowd as first Ashley Noe spoke of how domestic violence had touched her life through a one-time incident when her husband left her for another woman. Through counseling and her husband’s much sought help and willingness to show effort, Noe said they were able to overcome the violent incident and their marriage was restored.

Alex Noe completed the story by saying it can happen to anyone and nobody is immune, noting that before the incident occurred he and his wife were church-goers and had hardly ever raised their voices to one another.

“We were always in church and very close to God, but then I straddled the fence and got involved with another woman,” said Alex Noe. “I let things get out of hand and I ended up being violent towards my wife on one occasion.”

Alex Noe said he is thankful for that “piece of paper” (EPO) which brought him to his senses and put him on the road to seeking counseling which in turn lead to the restoration of his marriage.

“Actually, Ashley and I were supposed to be at church tonight, but we felt it was more important that we be here to share our testimony,”said Alex Noe.

Other groups attending the vigil included students and officials of the Appalachian Challenge Academy and rehabilitation members and participants of Lydia’s House of Faith.