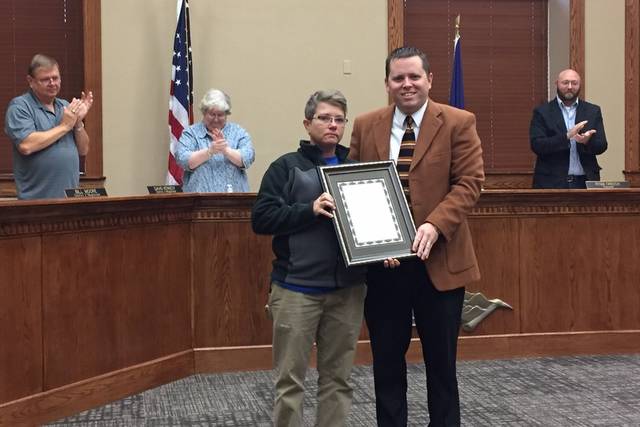 The Harlan Fiscal Court issued a proclamation honoring Leslie Bledsoe for her charitable work, including spearheading efforts to aid recent hurricane victims in Texas and Florida.

Harlan County Judge-Executive Dan Mosley brought the topic up early in the meeting.

“I’d like to do a proclamation for a person I’ve known and worked closely with for the last several years,” Mosley said. “What she’s taken on this year has been absolutely incredible from a community volunteer perspective.”

Mosley said Bledsoe has inspired people to get involved with charitable activities.

“In addition to all the volunteering, they’ve also started a business in the midst of this while still working on a daily basis, and recently made two long trips toward Texas and Florida to assist with the hurricane relief,” Mosley said. “She was also recently named the Harlan County Chamber of Commerce Volunteer of the Year.”

Mosley then called for Bledsoe to come before the court and read the proclamation.

The proclamation states Bledsoe has volunteered her time for the welfare of Harlan County and beyond, has volunteered on the Poke Sallet Festival committee for seven years and also volunteered with the Farmer’s Market, Halloween on Main, Hospice and other organizations.

“Whereas Leslie Bledsoe devotes time and effort to random acts of kindness…the Harlan County Fiscal Court would like to thank her for being a great asset to the county,” Mosley said.

• Permission to apply for a 2018 Litter Abatement Program Grant was approved;