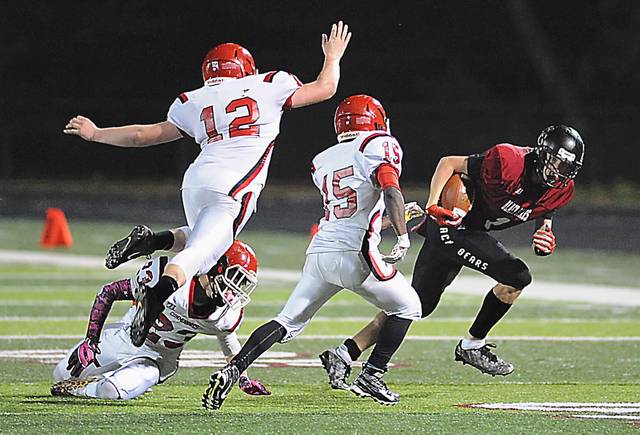 Harlan County senior receiver Devon Rodrigues turned up the field after making one of his four catches Friday in the Black Bears’ 38-14 win over Perry Central. Harlan County finished in a three-way tie for the top spot in District 7 of 5A.

When healthy and at full strength, the Harlan County offense can present a lot of problems for opposing defenses with their athleticism and versatility.

The Perry Central Commodores had no answer for stopping the Bears, either on the ground or through the air, as HCHS scored the game’s first 38 points to start a running clock on the way to a 38-14 win Friday. The victory locked the Bears into a three-way tie for the District 8 title with Whitley County and North Laurel.

“We thought that might be a strength of ours coming into the game and I kind of game planned that way to get my guys out in space and let them do some things,” Harlan County coach Eddie Creech said. “Our boys came out and played pretty hard. It was Senior Night and there was a lot of emotion. I think they wanted to get a win in potentially their last home game.”

Harlan County (4-5 overall, 3-1 district) was just as effective on defense, limiting the Commodores to only two first downs in the first half and 65 yard of offense through the first three quarters. Perry Central (6-3 overall, 1-3 district) struggled without senior running back Jacob Woolum, suspended for the game due to an ejection in the Commodores’ loss last week to North Laurel. Linebackers Garry Henson and Caleb Carmical led the strong HCHS defensive effort.

“You’re talking about a team that has been leading the state in rushing, so hats off to our defense,” Creech said. “It speaks volumes about our focus on defense.”

The Bears were a long way from perfect despite the big win as HCHS was penalized 11 times for 125 yards and receivers dropped three touchdown passes.

“We left a lot of points out there between special teams and dropped passes,” Creech said. “There were a lot of mistakes that didn’t show up because of the score, but they would show up in a close game. That was my message after the game.”

Harlan County turned the first of two Perry Central turnovers into points after senior lineman Jacob Ward recovered a Jayden Ward fumble on the Perry Central 22 on the game’s second play. Junior quarterback Colby Cochran completed two passes to Tyrese Simmons, then ran for 10 yards before Quinten Mickens went the final 6 yards for a touchdown and a 6-0 lead with 9:28 left in the first quarter.

The Bears drove 86 yards in 10 plays in a series that began late in the first quarter and ended with 10:37 left in the second quarter when Rodrigues caught a 24-yard pass from Cochran. Cochran teamed with Rodrigues for two passes in the drive and had runs of 11 and 17 yards. A high snap prevented the conversion as the Bears led 12-0.

Harlan County went 84 yards on its next drive but needed only two plays as Rodrigues had a catch for 20 yards and Simmons went 64 yards on a jet sweep. Kelly’s kick was blocked and the Bears led 18-0 with 7:36 to play in the first half.

Henson’s sack of Jack Sluss on third down backed up the Commodores to their 13 and set up another score. A 49-yard run by Mickens on a third-and-16 play was the highlight of the Bears’ fourth touchdown drive, which ended when Simmons went 6 yards to make the score 24-0 with 1:27 left in the first half.

Colby King hustled down the field on special teams to recovered a fumble at the Perry 18 on the ensuing kickoff Stapleton took over as the primary ball carrier at that point as he scored on an 11-yard run late in the first half for a 31-0 lead at the break and then added another 11-yard touchdown run with 4:18 to play in the third quarter to start the running clock.

“Paul is a hard-nosed kid and we finally got him back healthy,” Creech said. “If he keeps his shoulders forward and goes north he can really help us.”

Perry Central scored twice in the fourth quarter as Neace ran 30 yards with 11:40 left and Sluss went in from the 1 with 3:03 to play. Mason Rice added the two-point conversion after the last score.

The Bears will likely finish third in the tie-breaker, which gives teams points for each win by a defeated opponent. Ashland Blazer gives the Bears eight points after their win Friday over defending 4A state champ Johnson Central, but it’s the only non-district win at this point for the Bears. Whitley County would probably win the tie-breaker by defeating Hazard next week, but North Laurel could claim first if the Colonels lose.