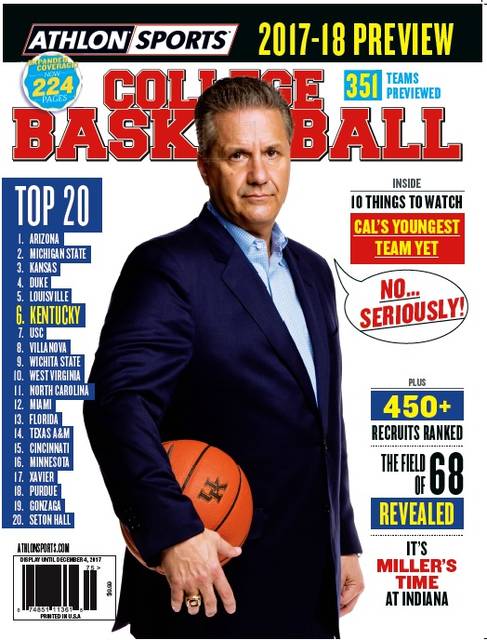 Athlon Sports, which features Kentucky coach John Calipari on the cover, picked the Wildcats as the nation’s sixth-best team in its preseason publication.

As you know, when October rolls around, it’s basketball time in Kentucky.

That means the college basketball yearbooks are out, too, and they are forecasting a banner year for the Wildcats this winter.

All three publications — Athlon Sports, Lindy’s Sports and Street & Smith’s — have picked Kentucky’s men squad at the same spot — No. 6 — in their preseason rankings. While the Wildcats are loaded with rookie superstars, they are sorely lacking in experience. Sophomore Wenyen Gabriel returns as team’s leading scorer and rebounder with 4.6 and 4.8 points, respectively, from last year’s 32-6 squad. In addition, Athlon has Kentucky coach John Calipari on its regional cover.

Behind Kentucky in Athlon, the other ranked SEC teams are No. 13 Gators, No. 14 Aggies and No. 25 Alabama Crimson Tide.

U of L, by the way, is ranked in the Top 10 in all three yearbooks. However, it is expected the Cardinals, now led by acting head coach David Padgett, will suffer or struggle somewhat because of the highly-publicized college basketball scandal and the possible loss of McDonald’s All-American Brian Bowen.

Also enjoyable is Athlon’s “10 Things To Watch in 2017-18” piece, including Missouri’s 6-10 freshman star Michael Porter Jr. (who likely will be NBA’s No. 1 overall draft pick in 2018), coach Tubby Smith and his troubles at Memphis, and Kentucky’s youth experiment. Lindy’s has several interesting articles, including the Porters’ father-son tandem at Missouri and Texas coach Shaka Smart as well as the player ratings at five positions.

Meanwhile, Kentucky coach Matthew Mitchell and his women’s team — which lost two stars (and now WNBA players) Makayla Epps and Evelyn Akhator from last year’s 22-11 club playing against one of the nation’s toughest schedules — are hopeful the Wildcats will improve this season. Key returnees Taylor Murray, Maci Morris and Alyssa Rice will guide the squad along with talented newcomers. And don’t forget Stony Brook transfer and 2015-16 America East Conference Rookie of the Year Ogechi Anyagaligbo, who practiced with the team last winter.

Lindy’s has UK ranked at No. 19 in its preseason poll. Coach Dawn Staley’s South Carolina club — which lost three starters from its 2017 national championship squad — will still be tough with 6-5 senior All-American A’ja Wilson, ranking No. 8, just ahead of No. 10 Tennessee, No. 11 Mississippi State and No. 15 Missouri.

The other two yearbooks didn’t have Mitchell’s Wildcats rated among the top clubs.

By the way, Calipari is not the only coach from Kentucky who has his team ranked among the preseason Top 10. How about Bellarmine Knights team from Louisville? Street & Smith’s has them ranked No. 4 in NCAA Division II poll. The head coach for Bellarmine is Scott Davenport, a former U of L assistant who is beginning his 13th season at the school. Named a national coach of the year by two different outlets in 2011 after helping his Knights team capture the national title, Davenport once served as the boys’ coach at Louisville Ballard High School where his team won the 1988 state title.

Another Division II national powerhouse is close to the state of Kentucky. Located near the Kentucky-Tennessee-Virginia border, Lincoln Memorial is rated No. 6 in the same poll, just behind No. 4 Bellarmine. The Railsplitters, led by three-time national coach of the year Josh Schertz, have made two straight Final Four trips and posted three straight 30-win campaigns.

Two other Kentucky schools are getting yearbook recognition as well. Street & Smith’s has Pikeville and Georgetown at No. 6 and No. 7, respectively, in the NAIA’s preseason Top 10 rankings.

Kelly Wells, who once coached Tennessee All-American Chris Lofton at Mason County High School where they captured a state title and a state runner-up finish during the early 2000s, is now in his 12th season at UPike.

Coaching at Georgetown is Chris Briggs, who was a student manager and a graduate assistant at UK under coach Tubby Smith. Also serving on Briggs’ staff as assistant coach this season is former Wildcat standout Marquis Estill. They both were at UK together.