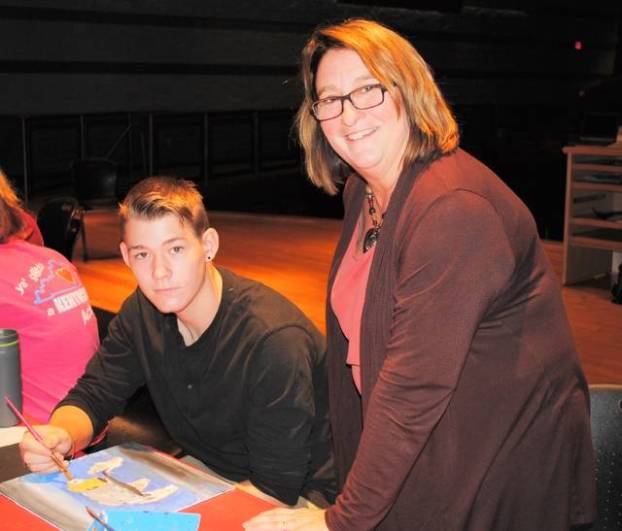 Toby Moses worked on a painting of a miners safety hat with the assistance of Harlan County High School art teacher Sue Lintelman as part of the Creative Asset Mapping project.

Telling Harlan County’s story through the eyes of students was the goal of the Creative Asset Mapping project on Sept. 19-21 at Harlan County High School.

The project was supported by an award from the National Endowment of the Arts and facilitated by Partners for Education at Berea College (PFE). Partners for Education at Berea College works with school districts and local nonprofit agencies to run educational outreach programs. This project was presented Harlan County staff members Kim Howard, Jean Anne Lee Sue Lintelman, Scott Pace and Johnathan Wireman. The teachers overwhelmingly agreed Harlan County High School students would participate in the project.

Lintelman invited a professional mural artist from Chile, Alfredo Escobar, to help with the project.

“Mr. Escobar assisted my students with the challenge of creating, drawing and painting working hand to tell the story of Harlan County,” Lintleman said.

The idea was suggested at the first meeting.

“I was really excited with the outcome of the painted panels. The students did a great job,” she said.

Lintelman and Escobar listened during the final day of the program while the students shared their work and reasons why they created their images. Escobar was impressed at the talent of the students and their contributions to the project.

“We all have a story to tell, and our lives are better by knowing those stories,” Escobar said.

The hands artwork started the project theme. One of the most memorable paintings was of two shaking hands. The story behind the painting is that of Jimmy Fields, who has been a janitor for almost 20 years and now works at Harlan County High School. He iswell known by students and staff and always makes sure the school is looking at its best.

“These students were in ninth grade all the way to 12th. These paintings really tell a story about Harlan County people. I think they did incredible work,” Lintleman said.

In the second stage of the project, Howard and Lintelman worked with students from arts and humanities and English leadership to interview people. The interview matched the artwork theme. Wireman recorded the interviews and edited them with his students.

In the third stage, Howard worked along with Judy Sizemore to create writings about the subjects within the artwork. Sizemore is a professional poem writer and assisted the students along with Howard to write and create a finished poem.

The final stage included Pace and Wireman. They edited the pictures, audio and audiovisual media for the finished project. The Harlan County High School project will be one of approximately 40 other schools throughout the state to appear on the Kentucky Public Broadcasting Station Education site. This year’s project will be geared specifically for eastern Kentucky.

Harlan County High School staff members were pleased to be a part of the Creative Asset Mapping project.

“When I heard about this project I just wanted Harlan County to part of it,” Lee said.