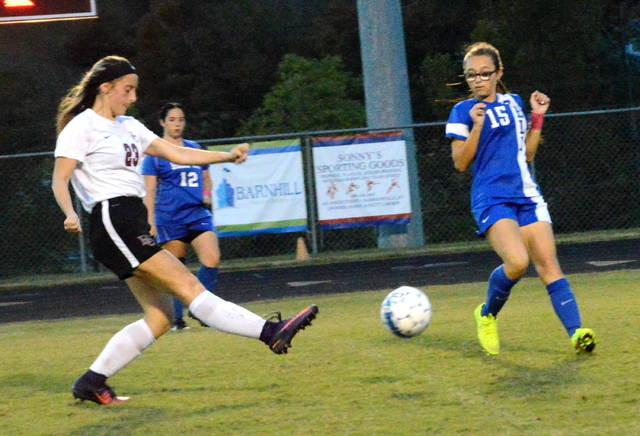 Amber Allen took a shot during Harlan County’s district tournament game against Bell County on Monday. The junior midfielder finished with a team-high two assists on the night. The Lady Black Bears advance to the district championship against Knox Central at 6 p.m. on Thursday.

With the loss, Bell County’s season comes to an end while Harlan County moves on to the 50th District championship against Knox Central on Thursday. The Lady Black Bears also earn a spot in the 13th Region Tournament.

“The first half, we were reacting and not being proactive. (Harlan County) kicked the ball…we kind of stood and watched to see what happened. Then we would run after it because we were standing and watching and not moving after them,” said Bell County coach Adam Huber. “They had plenty of shots on goal and got a few by us. The second half it got a lot better. We talked about it at halftime about closing them down, how to play them better, and they adjusted much better too.”

Harlan County was led in scoring by Key with three goals. Blanton finished with two goals and one assist. Cali Asher tallied one goal on the night. Amber Allen ended with a team-high two assists.

Bell County had a chance to score when Kayla Payne took a shot on goal after a Victoria Robbins throw in. The shot did not find the back of the net.

With 2:11 left in the first, Blanton scored from just outside the box to increase the lead to 4-0. A few seconds later, Blanton scored again on a breakaway to give Harlan County a 5-0 lead heading into halftime.

Key finalized the score at the 23rd-minute after scoring to secure a six-goal victory for the Lady Black Bears.

Huber’s third season with the Lady Cats ended with a 0-13 record. The coach said he saw improvement throughout the season from his team.

“I saw a lot better control and trying to move the ball. At the beginning of the season, they’re goal was to just kick it out. That was fantastic for them,” said Huber. “We need to score, not just kick it out. So, possession was better, moving the ball was better. They did get better going to the ball. (Their) overall soccer knowledge got better. We started playing the game and started coming together as a team.”

“They all three did well today,” said Huber. “One was a little under the weather, so we had to limit her minutes. One has a few years experience, and she is going to be dearly missed as a sweeper. The other one did a good job. This is her first year playing stopper, and she adjusted to the role well. They’ll all be missed, and they’ll all do well in college. I’m excited for them to go to the next level and be in college.”