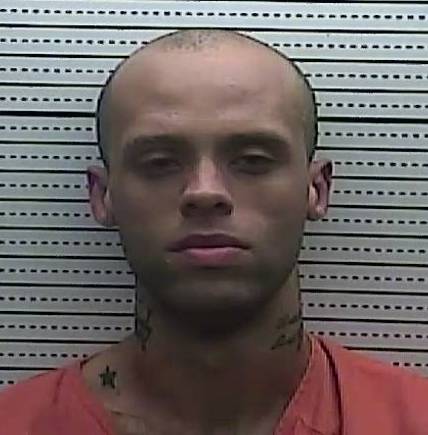 A Baxter man is facing charges including marijuana trafficking and possession of a firearm by a convicted felon after police responded to a shots fired complaint.

According to the citation, police responded to a complaint of shots fired at Carr’s residence. Witnesses advised Carr was outside shooting a gun when they approached him and asked he not fire the weapon in the trailer park. The witnesses stated they observed Carr loading the gun, and he yelled at and cussed the witnesses. Permission was given for a search, and police located three firearms in a back room. Two other residents advised police two of the guns belonged to Carr. Carr, who is a convicted felon, was placed under arrest. He began yelling and cussing at police, refusing to go peacefully. Carr was placed in the back of a police vehicle, and he began kicking the door while being transported to the Harlan County Detention Center. When Carr exited the vehicle at the jail, police located a bag containing suspected gabapentin, a small amount of marijuana and a substance believed to be methamphetamine.

Carr was charged with possession of a firearm by a convicted felon, first-degree trafficking a controlled substance, trafficking in synthetic drugs and trafficking in marijuana, menacing and resisting arrest. He was lodged in the Harlan County Detention Center on a $2,500 full cash bond.

According to the citation, police received a complaint of methamphetamine being manufactured by the occupants of a room at the Plaza Motel. Police received consent to search the room, locating a piece of tinfoil with a clear substance on it, a digital scale and a metal Altoids container which contained two clear plastic baggies. The baggies contained a substance suspected to be methamphetamine. Police also found multiple pills and suspected Suboxone as well as two used syringes. Watts admitted the items belonged to him.

According to the citation, police found Wynn passed out in the passenger seat of a vehicle at the Double Quick gas station across from Harlan ARH Hospital. A search of the vehicle located several empty syringes and a red section of plastic straw inside a glasses case. A loaded syringe containing a clear liquid which Wynn identified as meth was also found.

• Jim Edward Gilbert, 30, of Baxter, was arrested on Sunday by Kentucky State Police Trooper Kenny Sergent. Gilbert was charged with operating a motor vehicle under the influence of alcohol or drugs (fourth offense), operating on a suspended or revoked operator’s license, no operator’s/moped license, no registration plates, no registration receipts, failure of owner to maintain required insurance, failure to produce insurance card, obstructed vision and/or windshield, rear license not illuminated, improper registration plate, failure to register transfer of motor vehicle, permitting a motor vehicle to run unattended, third-degree possession of a controlled substance, prescription controlled substance not in original container and failure to wear a seat belt.

Gilbert was lodged in the Harlan County Detention Center on a $10,000 full cash bond.

Taking action to get what you want from life