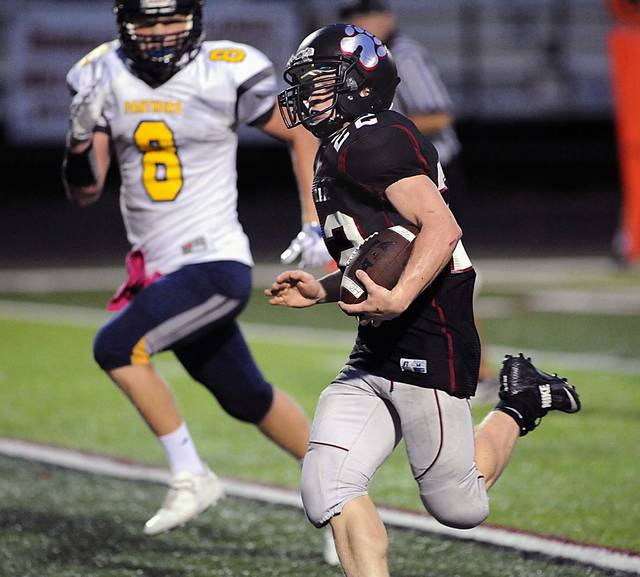 Harlan County freshman receiver Matt Brown broke free for one of his three touchdowns on passes from Jay Harris in the Black Bears’ 24-8 win over Knox Central.

Harlan County found a winning combination with quarterback Jay Harris and receiver Matt Brown as the duo teamed for three touchdowns to help the Black Bears move into the finals of the Southeastern Kentucky Conference junior varsity league playoffs with a 24-8 win Monday over visiting Knox Central.

“Knox came in and loaded up against our run. That caused us to have to throw the ball more than I wanted to coming in, but Jay was poised, made good decisions and hit the open receivers,” said Harlan County coach Matt Duckworth. “Matt Brown came up big for us tonight with some key receptions, and our defense continued to play really well. Coach (T.J.) Green has done an excellent job with them and it shows. I’m proud of every player on this team and look forward to playing for the championship Monday.

Harlan County grabbed an early lead as Harris teamed with Brown for a 40-yard touchdown pass in the opening quarter. Harris added the two-point conversion on an option play.

The Bears added two more points off a safety in the second quarter when the ball was snapped over the Knox punter’s head.

Noah Saylor set up the next HCHS score when he recovered a fumble on the Knox Central 14. Harris threw to Brown for the touchdown and a 16-0 lead with 1:17 left in the second period.

Zac Collett ended the final Knox Central drive with an interception in the closing seconds.

Knox Central scored early in the third quarter to cut the deficit in half.

A long kickoff return by Cameron Smitty set up the Bears for their final touchdown as Harris found Brown across the middle on a fourth-and-16 play for a 48-yard touchdown. Ben Landis went in for the two-point conversion and a 16-point lead with 2:05 left in the third quarter.

The Harlan County defense took over from there.

Freshmen linebackers Hunter Blevins and Josh Swanner teamed on a sack early in the fourth quarter to end one drive. After Tyler Casolari pick up a first down, the Bears’ drive stalled, but the defense came through again as Blevins again broke through again to make a stop in the backfield.

The 6-1 Black Bears advance to next week’s championship game against the winner of last night’s Corbin-Bell County game.

Greent plans to create his own UK legacy