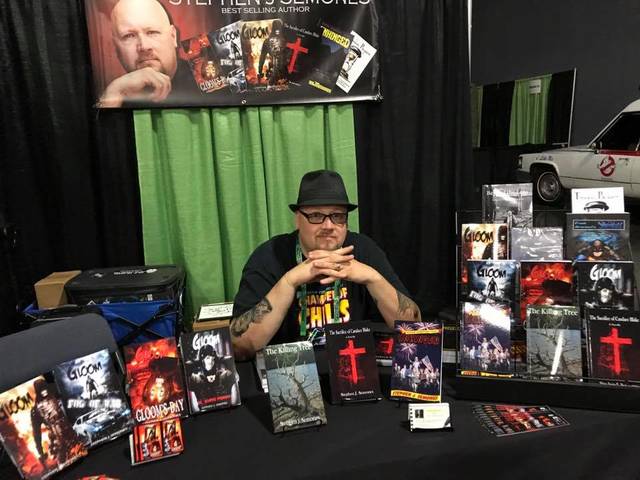 Stephen J. Semones is pictured selling his work at one of the many horror-themed conventions he attends throughout the nation.

(This is the fourth story in a series about one of Harlan County’s newest and fastest growing festivals.)

From campfire stories to classic novels such as “Frankstein” or “Dracula”, people love to be scared. To continue this tradition, Harlan Haunt Fest has invited some highly talented horror authors to celebrate the thrill of a good book.

Stephen J. Semones will be returning to Harlan Haunt Fest for his third appearance to promote his latest work “Vine in the Fire”, available Oct. 10, but he has many previous works to share as well. Semones first took an interest in writing at the age of 12.

“I always liked telling stories and writing, but it really wasn’t until I was 19 that I started taking it seriously,” Semones said. With the encouragement of his wife, Semones turned his attention toward novels in 2012. He published “The Wraith: Crossfire”, a novel based on “The Wraith” comic series, that same year.

Semones has always had a deep love for all things horror. He shared, “There’s just something about fear and being scared that makes you feel alive. I think it’s unique because there are so many emotions that can be expressed in a horror story. It’s really the only genre that can seamlessly blend with other genres.”

When not writing novels, Semones co-hosts “MORTIS”, a horror podcast. “MORTIS” explores horror-themed music, TV, movies, and video games with reviews, informative chats, and interviews with celebrities in the horror genre both in their podcast and on the “MORTIS” website. Semones says he never saw himself as a personality at a show, but he now loves it.

Since the success of “The Wraith: Crossfire”, Semones has published an additional 13 novels and two non-fiction books, including the popular series “Gloom”, which will have a new addition in 2018. Semones makes a point roll into another project just as his current one finishes stating, “I’m already writing another one and planning another one after that. Work begets work and I love it.”

Semones counts himself as a fan of Harlan, finding residents genuine and friendly. He is eager to meet attendees, stating that he thinks of those who visit his booth as more than fans or readers. He said he feels a connection with those who read his books and enjoys making friends at events. Semones is exited to treat Haunt Fest attendees with early access to his new novel “Vine in the Fire”. A limited number of advanced copies will be sold at his booth, so get there early to snag a copy.

Also appearing at Haunt Fest will be horror author and radio host Lyn Gibson. A longtime fan of all types of horror, she decided to become a writer after realizing how much she missed the classic characterization of vampires that she had always loved during the height of the Twilight Saga’s popularity. Gibson began work on a book which portrayed the classic blood-lusting vampire mixed with southern vampire legends. In 2012, Volume I of “The Adrian Trilogy”, was self-published. Her first book was so successful that she was presented with a publishing contract before Volume II could be released. After the success of “The Adrian Trilogy”, Gibson has gone on to publish a collection of short stories, “Short & Glory”, based on Stephen King’s “Creepshow” and a novel titled “The Wicked Truth”, which Gibson proudly dubbed her pride and joy. “The Wicked Truth”, her newest offering, was inspired by years of research into ancient vampire legends and is designed to reveal terrifying hidden truths about mankind. Gibson is currently working on a novel slated for release next year that she promises “to be even more bizarre and macabre than its predecessors!”

Beyond writing, Lynn is a radio host. She began her radio career on her town’s top local FM station as “Vampire Mama” a character she described as a “dark yet comedic sidekick to their top DJ”. She now hosts her own show on Armed Radio Global called “The Twisted Southern Horror Queen” which is broadcast in 62 countries and has about 128k listeners weekly. Her show can be found on Armed Radio Global and TuneIn Radio.

To celebrate “The Adrian Trilogy”, Blender built a top fuel front engine dragster called “Adrian’s Fury”. The Adrian’s Fury Dragster makes appearances with Gibson and Blender across the Southeastern United States, and it will be in tow when they appear at Harlan Haunt Fest this Saturday.

Joey Webb, a Hazard, Kentucky native, will be at Haunt Fest to share his work. He has written two collections of short stories entitled “Pleasant Screams” and “Gory Stories”, a short story, “The Wendigo’s Curse”, and he is currently working on fantasy horror novel which takes place in the old west tentatively titled “Wanted: Undead or Alive”. Webb got his start as an author after his teachers encouraged him to follow his passion. Friends of his gave him advice and helped him get his first story ready for publishing. He has always been a fan of horror and science fiction, for writing those genres was a natural transition for him, he states he loves horror because “The horror genre is unique in that it isn’t limited by the laws that sometime limit other genres. Horror is universal among every country in the world.”

In addition to his writing, Webb is also a filmmaker working on his first feature film and has acted in several intendent films throughout the area. Webb is excited for Haunt Fest because he is looking forward to getting back to the mountains of Southeastern Kentucky to meet fans of his work near his home town and make some new friends who may not be aware of his work.

Steven Paul Watson is a creative at heart. He is not only an author, he is a wood crafter and a jewelry maker as well. He will be attending Haunt Fest this week to not only share his books, but to sell crafts, to. Watson stated that the horror genre is part of who he I, since he can remember he has always loved all things horror, and his favorite holiday is Halloween. For this reason, he is excited to come celebrate with everyone at Haunt Fest, meet new people, and share his novels with everyone. He has written three works so far. When asked about his favorite, he exclaimed, “Howling Moon! It’s my debut novel and I’ve always loved Werewolves from an early age and it was just a lot of fun digging into that genre.”

Come meet Watson and all of the other featured guests at Harlan Haunt Fest Saturday at the Harlan Center. It begins at 10 am and is only a $10 entry fee to participate in events all day. For more information about Saturday’s Haunt Fest, log onto www.harlanhauntfest.com.